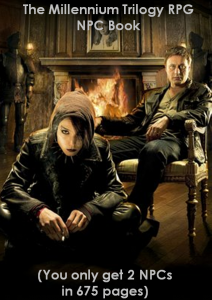 Attention: Slight rambling ahead, with a point to make about RPGs somewhere in there, you have been warned!

I recently finished reading the Millennium Trilogy by Stieg Larsson (that’s the girl with the dragon tattoo, which then played with fire and ended up kicking the hornet’s nest). And in case you are wondering, yes I do read other stuff that is not RPG related. The novels are a satisfying, if little long, suspenseful page turner with an implausible plot. I’ve heard so many people say they were captured by the plot from the very beginning, but I was not. If I had not been reading the book for a book club I probably would have never gotten through the first hundred pages of first novel. After that threshold the book really became engrossing. On the third book I had a similar experience; it did not take off for me after page 113. What about book two? Well let’s just say I only got through it to get to book three!

In all honesty I am being a little facetious, the books are fun an entertaining. Not classics but better than a lot of other stuff out there. After finishing the third book and preparing for the upcoming book club meeting I began reflecting on the novel and realized that one of the reasons I enjoyed the 3rd one so much was because so much of the book had to do with secondary characters. The parts I enjoyed the most had NOTHING to do with the protagonists. In a way that’s a compliment on the author who managed to make secondary characters so memorable, but it’s really sad that by the end of the trilogy I had come to despise the main characters so much.

All this thinking made me ponder the characters we as Game Masters create to populate our games and ended up being a reflection on Non-Player Characters.

Larsson created (in my opinion, yours may vary) bigger than life protagonists, that despites their foibles are so good at what they do that they simply became caricatures. Mikael Blomkvist is the unflappable reporter, irresistible to all women, a perfect alter ego for the author, and Lisbeth Salander is the super hacker of the 21st century, overcoming all her past tragedies, strong capable, a modern Amazon. They made me think of that mythical beast, the bane of many a group, the GM character. That special NPC that is better than anybody else, who overshadows everything the player characters do and speaks with the GMs voice. You would think that even a slightly experience GM would know how to avoid this, but I keep hearing horror stories. Let’s take a moment to reflect on this, even if we don’t admit it there is always that NPC you like just a tad bit more than the others, the old wise sage you are attached to, I say to you, kill that NPC. It’s the best thing you can do! 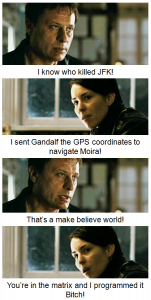 Perhaps I’ve been lucky I’ve never had too few players, on the contrary, I usually have too many at my table. So there’s never been the real need for me to run an NPC to round out the party. I guess that’s the more common thread in many (NPC) horror stories. There were just not enough players so the GM ran a character. There is also the argument that a GM rarely gets to play and he or she want to experience playing a character. I find this last argument rubbish, if you are the GM you don’t get to play a character, your role is to tell an entertaining story by working together with the players, plain and simple.

If Larsson was my GM and I had to play in a game with Blomkvist and Salander I would probably drop out of that game in no time. I can understand the complain of some players when they play on published campaigns and feel like second stringers to drow super rangers and pipe smoking wizards that break the fourth wall. GMs who have NPCs that are just better than anybody else, that humiliate the PCs or rescue them all the time, who tells them the plot and then guides the like spectators through encounters only  the NPC can solve are the enemy of any game.

But you know what? Larsson’s novels are not a game, they are novels and in a novel an author strives to create memorable characters, protagonists the reader can identify with because reading those novels is a passive form of entertainment. For my taste they may not be the best characters, but I know for a fact others love them and identify with them to great a great extent. And here is one of the problems with GM NPCs. Some GMs think their game is a novel or that the most important thing is to tell a story, the story they have created. I’ve been guilty of these at some point. But that is not why we play, we play to be entertained, to have fun, and no NPC should be more important than the protagonists of the game, the player characters.

That’s why again I invite you to think long and hard and identify your favorite NPC, the one you just cannot do without, and kill it!

That must sound like a weird bit of advice, specially coming from a GM who usually juggles so many NPCS. In my Pathfinder RPG game the player have a ship and the crew and passengers are all named NPCs with personalities and quirks, the PCs usually have about 20+ NPCs with them at all times. My current DC Adventures (Mutants & Masterminds 3rd Ed) game has 49 NPCs after only five sessions. So I love my NPCs, I just try not to love them too much!

Looking back my worst infraction when it comes to GM NPCS was during an AD&D 1st edition campaign. The PCs knew this wise wizard, who in fact was a polymorphed Gold Dragon, that gave them their quests, pointed the clues they missed and helped them in almost everything except adventuring with them. To me I was playing a clever old character, benevolent and fatherly to the players. Not until much later did I learn how much the players despised him, when one of them asked me to run a game in my campaign and he had his player character kill the NPC. The other players cheered him on, but I was furious, how dare he kill my most important NPC when I allowed him to play in MY campaign. I was ready to kill his character; the grudge monster list was not long enough.

But then I asked myself, why was I so mad? The fact that the player did this, that others cheered him on, it was telling. My NPC was an asshole and I had fallen victim to the GM NPC trap. From that day on I told myself no more. I would recognize the importance of NPCs, after all they make the world around the player characters come alive. Strive as much as I could to make them believable, but never think they were more important than the PCs. Have I succeeded? Not always, but I try every time I GM!

So I urge you again, for the third and final time, find that NPC you love, that one the players have become attached to and kill him. There is no greater way to shake things up and prove to yourself that they are just NPCs…

My take on “unfinished business”