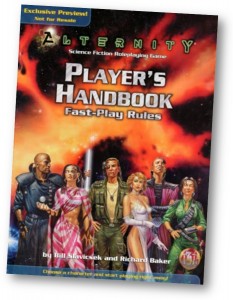 The recent post by HyenaSpotz about the Alternity RPG really struck home! I was a big fan of the game when it came out and his terrific review of the game brought back some great memories. When Alternity was announced I was immediately interested; the fact that it would be a “generic” sci-fi system I could use to create my own campaigns was right up my alley. I was an AD&D 2nd ed. fan and was sure this game would do for sci-fi what AD&D did for fantasy. I snatched up the Fast Play Rules and was planning my campaign even before the core books came out.

As I have said before, I am a compulsive home brewer so it should be no surprise I had been tinkering with a sci-fi setting since high school. Many aliens looked like the aliens from Marvel Comics or DC’s Legion of Super Heroes (I had no artistic talent to draw them and back then I had no access to the Internet… Yes there was such a time!), but I had come up with this idea where the human race had begun a Diaspora to the stars and arrived in a galaxy populated by many diverse alien races. I had done some freeform role playing in the setting, tried adapting it to Star Frontiers, but to no avail.

Then along came Alternity! After what seemed like forever the book finally came out. I had already played a brief (and not terribly successful) session using the Fast Play Rules so I dove right in. I loved the book and soon was writing up the statistics for new alien races, the story of the setting and rudimentary star map.

The year Alternity came out was special for many reasons and Alternity is inexorably linked with many wonderful memories. Alternity came out the year I got married and I as reading the books and writing for the game all through the preparations. My campaign featured biogenetically enhanced knights thematically organized around the mythologies of Earth’s ancient past, each order possessing powers based on the mutations chapter. The Tangents books had not come out yet. Puerto Rico was hit by a terrible hurricane that year and we were without power for about a week, I remember sitting by candlelight and flashlight writing up the stats for the different orders. To say the Alternity RPG engrossed me is an understatement. 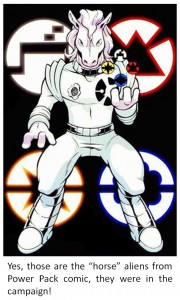 I did not play the game until about a year later and we had a blast. The game lasted between twelve or sixteen sessions and sadly it petered out. The group consisted of six players, one of which despised the rules (he never “got it” but now admits he never tried and did not want to really play the game back them) and another a power gamer who created a robot character and exploited the rules (you are a dear friend but you know who you are!). I did not master the rules enough to spot these game breaking combinations early enough to stop them until the game was underway.

Despite those two factors the game was a lot of fun to play. The toolbox approach fit my style of gaming perfectly, it allowed me to construct the campaign I wanted and once characters were written up all the information they needed was there on their character sheet. There was minimal rules look up, with the exception of the psychic powers. The dice mechanic was intuitive and easy to adjudicate from a Game Master’s perspective. The way characters took damage was sometimes confusing for the players, but you have to understand we played AD&D almost exclusively for years (with the occasional RIFTS, Heroes Unlimited or World of Darkness game, don’t judge us it was the 90s) so it was only a matter of getting used to the new system.

Alternity was a fun game to play and the supplements were also top notch. However, unlike most fans I was NOT enamored by the Star*Drive campaign. The setting struck me as needlessly complex and a case of “throw in everything AND the kitchens sink” design philosophy! And then there was the art… I cannot recall a single piece of art that I liked from that book; it made me cringe as I leafed through it. Some of the supplements for the setting were useful. Dark-Matter was another matter (pun intended)! Here was an engrossing and well developed modern conspiracy game that showed the potential of the game system.

But by the time the book came out we had stopped playing Alternity. I think it was a mix of some players’ unwillingness to learn a new system and the siren call of a long running fantasy campaign everyone wanted to get back to.  I never got the Alternity version of Gamma World so I can’t really say anything about it. 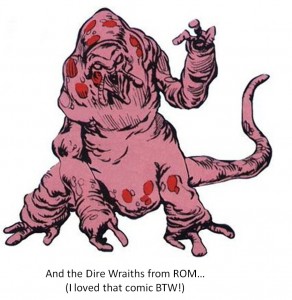 The campaign lived on and we played it again using the dX system by Guardians of Order. I hope to someday revisit it; this campaign is almost as important to me as my fantasy campaign. Heck, I even got a tattoo of the symbol of the political alliance that gave the campaign its name.

Now looking back and rereading the rules they seem so simple and straightforward. Not long after Alternity was cancelled we switched to D&D 3rd edition, and we had some pretty rough growing pains adapting to that system. But we stuck to it and eventually came to love it, I’m sure that is we had stuck to Alternity we would have mastered it as well.

Now as I ponder my possibilities for a future sci-fi game I have considered using Savage Worlds, Cortex, Stars Without Number, but after reading HyenaSpotz post Alternity has suddenly become a contender. I have to print out some Fast Play Rules and hand them to my players to see what they think. Will this be the year of Alternity? I’ll let you know…

Thanks again to HyenaSpots for his inspiration and bringing back so many wonderful memories!