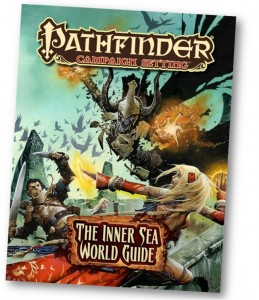 This past Saturday I went down to my FLGS and got my hands on the new Pathfinder RPG campaign setting, the Inner Sea World Guide. Any casual reader of my posts will know I am a homebrewer at heart and that I rarely run pre-published campaigns, but I am not below getting campaigns settings and mining them for ideas, rules or even the occasional renamed NPC. A prime example is the regional feat concepts in the D&D 3rd edition Forgotten Realms campaign setting. Those were quickly nabbed and adapted to my campaign back them.

I have not posted about it but, recently I’ve been getting more and more Pathfinder RPG books that are Golarion specific (that’s the name of the campaign world for the uninitiated). While I am a confessed Pathfinder RPG fan I have stayed away from the Golarion specific books. I did get some of the original Adventure Paths but as part of my “more is less”/spend less in games philosophy I stayed away from a lot of fluffy books and stuck to the rules.

So that means I missed both previous incarnations of the Golarion campaign setting. I had heard excellent things, and the bits and pieces hinted at in the core rule book and other supplements, really enticed me. I have seen the promos and when my friend and fellow player called me to let me know the Inner Sea World Guide had arrived at the FLGS I gave in and said “hold it for me!”

I tweeted my very first impressions after leafing through the book and later after spending about half an hour looking it over, but I could not put it away and this led to this post. Mind you this is still VERY preliminary, I have only read bits and pieces, but I’ll share my first impression.

I am very impressed. Very happy I got this book. The price tag is by no means small, $49.99, and while I could have gotten this at a discount online I am trying to support my FLGS now that they are carrying more Pathfinder products.  But you know what? This is a beautiful book, full color, with the quality art I’ve come to expect from Paizo and its simply HUGE, 318 pages! (A friend of mine complains about reused art in Paizo books, of course he gets ALL the Adventure Paths so that may be the case, I really have NO idea, for me this is all mostly new art, your experience may be different.) So I am not sorry I spent the money!

And, what about the content of the book you say? Well let’s dig in… The first part are races, all the traditional fantasy races are there, as well as specific human cultures. Each gets their one page description with common names, appearances, and mostly rules free, the one exception being a very powerful human culture with inordinate bonuses which can only be used with GM approval, which seemed to me a poor choice in an otherwise fine chapter. There are brief discussion of other races that can be player characters and references to where you can find the rules to play them.

If you are not a fan of the type of campaign worlds with lots of fantasy races the plethora of races may turn you off. But I believe lots of fantasy fans like this hodgepodge that gives them many options to choose from, it may offend your sense of verisimilitude, but you can downplay certain races in your campaign. This is one thing I get from the book, this is a large catalog of options and ideas, which work together as a whole, but put in your hands to shape as you see fit. I appreciated that each human “race” or ethnicity is given their own page. Oftentimes in other campaign settings you’ll get discussions on elves and dwarves and their myriad sub-races, and humans get lumped together as a whole. Here I got a very different feeling. True dwarves, elves, gnomes and such get their own one page write up, but each major human culture gets a separate description. You know who’s emphasized here! 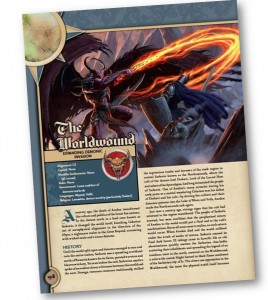 The next chapter is an overview of the Inner Sea region, its history and a four page write up of each country or region. I have only read a couple, but I love the combination of details and broad strokes. The write ups open with a short phrase that summarizes what the region is and specific details (alignment of the region, population, language, a crest or symbol of the region), and an image evocative of the place. I love the page layout; the opening page has a small detail on the header that includes a small version of the map of the region, with a proper map later in the write up. It covers history, government, and a gazetteer.

What did I mean when I said “details and broad strokes” on the previous paragraph? Well when I read a description of a kingdom I get enough details to feel what makes the place unique and to plan a game there, but room to tell my own stories. I am sure that if you have played the Adventure Paths you’ll know more about the regions, but this is a great primer for the uninitiated.

I don’t have a proper grasp of how all the culture come together, haven’t read enough, but there seems to be something for everybody here. There are pirate islands, Middle Eastern themed kingdoms, more traditional European themed fantasy kingdoms and their inevitable variants, unexplored jungles, something for everybody.

The wide spectrum of diverse cultures may not be for everybody, it reminds me of Mystara in some ways (And I’m a Mystara fan, so this is a plus in my book!) but it seems there was more thought put into why each culture is where, not simply a new culture across each mountain range that seems to have been the case with Mystara.

I love the hints and details on what’s beyond the Inner Sea and the discussion of planar cosmology. There is even a discussion on the solar system. It immediately made me want to run a Spelljammer campaign in Golarion.

Then there is a chapter on religion, including major deities, minor ones, even cults. Then one chapter on life on the Inner Sea, calendars, flora, fauna, and then comes a chapter on faction of the Inner Sea. I have really not much to say on this since I have not read much, but it seems a great source of possible groups the players can join, or antagonists, depends on how you play it. 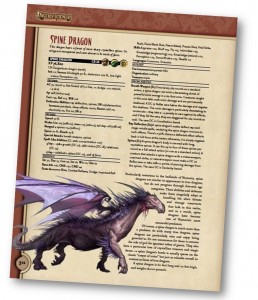 The 6th section is called Adventuring and there is a lot for me here. Rules I can pillage for my campaign: prestige classes, feats, magic items, spells, and equipment, including the firearm rules recently presented in the Gunslinger playtest in the Paizo website. The firearm rules are interesting; I need to use them to see how they work. I had adapted Monte Cooks technology rules to my game and I’m not convinced I should switch to this new ones.

The feat list even has a feat that mimics the D&D 4th edition healing surge, Godless Healing, available only to characters without a patron deity. I like the idea and the implementation, but the similarity to D&D 4th edition threw me off at first. The book closes out with a short monster section, just a few but I liked them. In case you are wondering, yes there is an index, another big plus for me.

I’m sure I missed a lot of details on this preliminary reading, but I like what I see and I want to read more. Golarion seems to be the spiritual inheritor of settings of old likes Greyhawk and Faerun. Yes, yes, I know the Forgotten Realms is still in print, but when I read the Inner Sea World Guide I get the same excitement I got when reading the original Forgotten Realms gray box.

Will I play in Golarion? Probably not… But I want to read more about this world. So I may just get a couple of more Pathfinder books. There goes my saving on RPG games resolution! If they are as good as this one, well, then it will not be a bad thing.