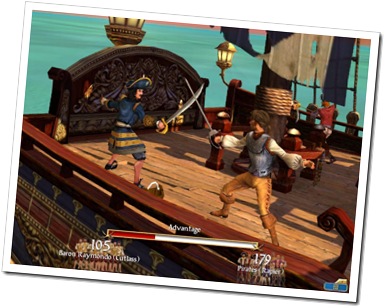 Recently I have started playing Sid Meier’s Pirates! again. Pirates! is a single-player, open world game set into the Caribbean during the late 16th and early to late 17th century. You play a ship captain working as a privateer for either the English, French, Dutch or Spanish.

During the game you can freely choose your allegiances, choose to attack enemy ships or towns, hunt pirates, seek treasures, rescue family members, court and marry a governor’s daughter, etc. A major part of the gameplay are the various minigames. In the original 1987 edition you had ship combat, fencing duels, turn-based strategic combat and a treasure finding minigame. The 2004 edition added a dancing minigame.

Playing that game got me thinking. In some of the roleplaying game campaigns I have been participating in the past had featured several minigames. In the Mechwarrior RPG, combats were usually played using the boardgame rules, in several D&D campaigns we had large battles that were fought using a simplified tabletop battles game, even puzzles that have to be solved by the players and not their characters can be called minigames in this context. If done well these activities can spice up any roleplaying game.

If the aforementioned Pirates! computer game was in fact a pen & paper RPG a lot of the minigames would be part of the normal roleplaying experience. The only exceptions are probably naval combat when played out as a tactical miniatures game and the strategic battles when raiding towns. The dreaded dancing minigame could easily replaced by roleplaying and some skill rolls.

In the firearms rules for Dungeonslayers I designed rules for Western duels using a deck of cards. Instead of rolling the dice the competing players used a modified version of Blackjack to resolve the duel. This might not be everyone’s cup of tea, but I thought this might be a fun way of handling the duel. That said I also included alternative rules which work a bit like a D&D 4E skill challenge since not everyone loves the idea of using cards in a roleplaying game.

There are countless ways of introducing minigames in one form or another into your roleplaying games. It might not work for every gamemaster or group but it’s definitely something you should keep in mind. After all it’s always good to have a few tricks up your sleeves.

Have you used minigames in your roleplaying campaigns before? As always I am very interested in your thoughts on the subject. Every comment is highly appreciated.