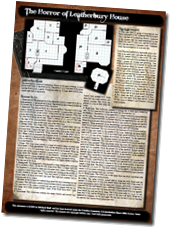 Last Friday I ran my first game of Fudge. An old friend visited me and asked me to run a roleplaying game since he hasn’t played in ages. At first he showed some interest in Esoterrorists, but then he told me that he would love to play the one-page dungeon I wrote for the 2009 One Page Dungeon Contest.

“The Horror Of Leatherbury House” is a short horror adventure set into the Victorian Age that was created with Call of Cthulhu in mind but basically works with every roleplaying game.

To keep things easy I decided each player should have three attributes (Body, Mind and Soul) and a set of broad skills. Initially I intended to let the players come up with skills for their characters, but then I just used some broad skill categories from the Fudge 10th Anniversary book. Each of the players was given 15 skill levels to distribute among the skills.

The whole character creation process took a couple of minutes and after picking some equipment, we were ready to go. The two characters were a Scotland Yard inspector who was on vacation in a small town in the English countryside and a mesmerist and occultist (played by my girlfriend) who had been asked by Lady Westmoreland to find out if there’s some truth to the claims that Leatherbury House is haunted.

Instead of creating detailed stats for each NPC, I just used one adjective to describe the abilities of NPCs. For example the zombies in room #6 were Mediocre. So whenever I had to roll for them, I assumed all their stats were Mediocre. This worked pretty well.

I also learned that combat can be quite deadly in Fudge. While no one was killed, at least one character was very hurt and the investigators had to retreat from the haunted mansion to tend their wounds and do some research.

But in the end they solved the mystery of Leatherbury House and buried the remains of the late Lord Winston. We all had a great time and Fudge worked like a charm. In my humble opinion it’s great for just eyeballing stuff. My style as a game master was always to improvise stuff instead of preparing everything, so that works great for me.

But I think next time I will try to at least prepare a proper skill list and some genre-appropriate gifts and faults. I also realized that for one-shot games using “Fudge in a Nutshell” is sufficient and it may be a great basis for longer games if you have access to the full rules so that you can add optional rules as needed.

5 Reasons Why You Should Check Out Fudge

My experiences with “Trail of Cthulhu”

5 thoughts on “My experiences with Fudge”