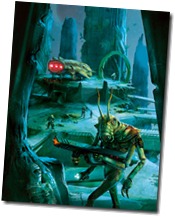 Ashen Stars is the latest game powered by Robin D. Laws’ GUMSHOE system. Ashen Stars is a gritty space opera game where the PCs are freelance law enforcers called lasers, who operate in a remote sector of space called the Bleed. Ashen Stars not only comes with a complete campaign setting, but also expands the GUMSHOE system with rules for alien species, space combat, cybernetic and viroware enhancements, to just name a few additions.

So, what’s the big deal with the pre-pre order now? It’s a special preorder deal that not only gets you the printed book and the PDF when it is released in August, but also some very special treats like immediate access to the game rules (albeit in a very simple PDF), your name in the credits, exclusive fiction and a signed and numbered copy on release. If you are a fan of Robin D. Laws works you just have to grasp that opportunity!

As you can imagine I already pre-preordered the game and got my simple prerelease PDF. Aside from a full-color cover and the character sheet in the back the 301-paged PDF is has not been layouted yet. But even though it doesn’t look that appealing, it’s a lot of fun to read. I leafed through it on my commute today and I enjoyed every minute of it. I can’t wait to hold the final book in my hands. Ashen Stars is a game that should appeal to all fans of GUMSHOE and the space opera genre.

By the way, this special pre-pre order phase should end later this month, so if you are interested in this deal, you should act fast. The pre-pre order is exclusive to the Pelgrane Press online store and the game sets you back £29.95 or $44.95 respectively (plus shipping of course).