Recently I have rewatched one of my favorite films: Ghostbusters! Even though the movie is *gasp* 27 years old it has aged surprisingly well. While some of the effects may look a bit outdated the action and humor work as well today as they did in 1984. The 1984 film has not only spawned a sequel but also several computer games and even a pen & paper roleplaying game.

In 1986 West End Games produced the “Ghostbusters: A Frightfully Cheerful Roleplaying Game” boxed set which was followed later by a revised edition called “Ghostbusters International”. The system used in those games was a predecessor of the popular D6 System, which is now available under the OGL. Alas these games have never been a huge success and are out-of-print for many years now.

As it happens quite often, I was wondering whether a Ghostbusters RPG would actually work. As I see it, it may work great for one-shot adventures, perhaps even limited campaigns consisting of only a few sessions, but I have a hard time seeing myself running or participating in a full-blown ghostbusters campaign, at least not without some major changes. 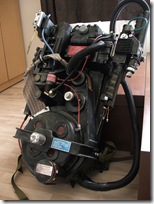 So what would be needed to make it work? I think Ghostbusters International already had the right idea. Use the background from the movies and let players create their own Ghostbusters teams. The world is a big place and the guys from New York, can’t be everywhere, so why not start some franchises here and there? This approach let’s players create their own teams but you can still use all the common elements from the technology used to hunt ghosts to the implied background.

Since the Ghostbusters RPGs from WEG are long out-of-print it might not that easy to track a copy down, so most players interested to hunt ghosts must look elsewhere. One game immediately comes to mind: Jared Sorensen’s InSpectres. This indie game has pretty much the same premise as a Ghostbusters game and has a very interesting if unconventional approach to conflict resolution that encourages roleplaying and a narrative play style.

Have you ever thought about running a Ghostbusters game? Or have you even played one of the WEG games back in the day? As always I am very interested in your thoughts on the subject. Please share your thoughts below.