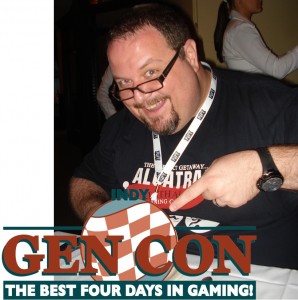 Last time I wrote about Gen Con was a week ago as I did my first day wrap up in the wee hours of the night. Then and there I realized writing posts after a long day of gaming and fun at the con would probably be unlikely. So I decided to enjoy Gen Con to the best my stamina would permit and I would write about it early the next week. Well you know what they say about the “best laid schemes of mice and men”…

First I got home to a work week of unforeseen dimensions, then the con-crud hit! The combination kept me down for two days. Then last night when I finally sat down to write my laptop crashed, and apparently my smart phone followed in a sign of support. I had about half of my pictures and a smattering of videos on the smart phone. I restored the laptop and solved that problem, the smart phone proved another matter. I lost pictures and videos, never to be recovered. So if I took your picture at Gen Con and you never see it, I apologize.

But you didn’t come here for the sob stories; you came here to read about games, specifically role-playing games which are the main topic of this blog. You’ve probably read about some  of the big news which I’ll link to in case you only read this gaming blog (and we can’t fault you for your impeccable taste!). Margaret Weiss Productions announced their deal to produce a Marvel superheroes RPG. Sounds like a well planned project, and while I am not currently on the market for a new supers game (more on this later) I will take a look. 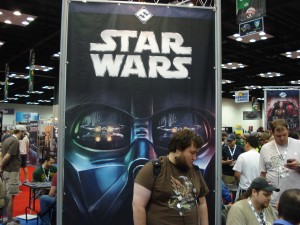 Fantasy Flight Games actually announced they have the Star Wars license for board games, card games and role-playing games just before Gen Con. They were running demos of their card game and X-Wing games at Gen Con both seemed interesting and I spent some time looking at people play. However I am mainly a role-player, while I dabble in the occasional board game, I would rather spend my time role playing. Will I buy a new Star Wars game? My knee jerk reaction is no, I have D6, and Saga, but the Warhammer 40K RPGs have tempted me, I’m just not that big of a 40K fan. Star Wars is another matter. I just might…

Wizards of the Coast had their Neverwinter campaign, D&D Encounters and a contest both at Gen Con and for those playing in encounters. The promo video looks really cool, and some of my friend interested in D&D 4th edition seem stoked about it. Since I don’t play 4th edition and I never played any of the Neverwinter computer games I was not terribly interested. I feel little bad that I can’t bring you more news about this but there is plenty of reports out there and while I was covering the convention for the blog I did want to focus in things that would be of interest to me. I hope there is some commonality with our reader. So what did I go for?

There were a few things I knew I was getting. Savage Worlds Deluxe was big on my list! I posted about the book and the pre-order, which I took advantage of and picked up at Gen Con, along with the Action and Adventure Decks. I had downloaded the PDF version that came with the bundle and printed it out, so I had “seen” the book before actually getting it, but even that did not take away from the sheer joy of holding the book in my hands. It is a beautiful thing, gorgeous to look at and sturdy. I ended up getting the official bennies as well as I am decided to run this game.

As I try to learn to better run Savage Worlds that was one of the games I wanted to play during Gen Con and thanks to my good friend David I did. I mentioned it on my previous Gen Con post, we played what was supposed to be a short game for over four hours and I got to experience firsthand how the game flows. I have a debt with David for showing me the way, thank you sir! 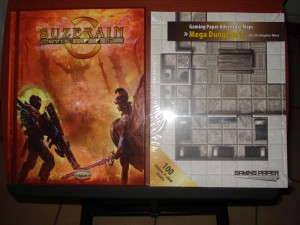 I got some other Savage Worlds books while in Indianapolis. From what I read of Suzerain it is a supplement to play deity-like characters using the Savage Worlds system. It gave me and Amber (the books, not the game) vibe and I couldn’t resist. Another book I was not looking for but discovered at Gen Con was The Day After Ragnarok. I had read about it but was not interested until someone talked to me about it, I held the book in my hands and I could not put it down. It’s a delicious blend of pulp and post apocalyptic goodness in the middle of the 20th century that fired my imagination. 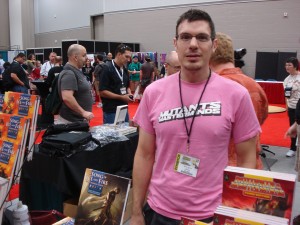 I also got another book by Ragnarok’s author Kenneth Hite, Cthulhu 101. While not strictly a role-playing game, who can say no to Cthulhu? Certainly not me! I got both books while on my way to the Green Ronin booth, as it seemed they were sharing the space. I was there to get some Mutants & Mastermind goodness. The system powers my weekly game and I wanted a copy of the 3rd edition rules of the game, the new DC Adventures Heroes & Villains Vol. 1 book and the GM Kit. Getting to meet Steve Kenson (who I interviewed for the blog when ICONS came out) and having him sign the book was just the cherry on the sundae. I just love this system; it has become my favorite superhero game and the reason why I said earlier I am not really looking for a new game of this genre.

My other must get book was Ultimate Combat by Paizo. It is a terrific book, with a new class that uses the firearms rules in the book, the Samurai and Ninja as well as options for all combat classes, a truckload of feats and even some spells. The book continues the tradition of great books for Pathfinder and it fuels the fire of my desire to go back to playing Pathfinder. Getting the PDF copy of the book for just $5 was just a bonus. I think the PDF copies at $10 are priced just right point and being able to pick it up for half the price was a big win. 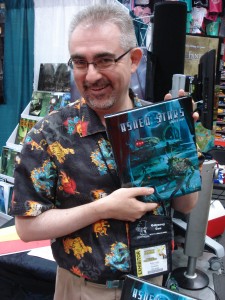 Pelgrane Press had Ashen Stars and the Esoterrorists, both using the Gumshoe system. Michael had told me so much about Ashen Star that I snatched it up and have not been disappointed. It is a beautiful book and the system is so elegant. The big surprise was Esoterrorist, I had read about it and was intrigued but I like it so much I have put down Ashen Star and I’m currently devouring this dark modern game, I highly recommend it! To me it’s not so much about the conceit behind Gumshoe and making investigation adventures easy, but simply such an entertaining read.

The Cubicle 7 booth was busy, busy, busy! They had The One Ring, and I got to meet Gareth Michael Skarka there. He is a terrific guy and I’m sorry I did not get to spend more time talking to him. They had a lot of the Adamant books there, I got what I want form them already, the already have my money, and I am glad they do.

I got some other goodies for my games, like the products of Dark Platypus Studios, including their magna maps, effect markers, pillars, clings, initiative tracker… Well let’s just say my biggest purchase at the con was from them! I got another customizable GM screen from another vendor, I already own two, but they had magnetic receptive inserts and I can do so much with them, not necessarily use them in the traditional screen function. The last thing I got was Gaming Paper’s Mega Dungeon and accompanying adventure. Amidst all the post con reading I have NOT gotten to the adventure but the map is MASSIVE and it just tickled my geek fancy!

There were plenty of other things I saw, demoed and almost purchased, but as it was I returned with over 50 pounds (about 23kg to you metric folk) in extra weight in my luggage (which I suspect made the airline very happy) so I could not get everything. So let me tell you about the other games. Amaranthine by Machine Age Productions seemed intriguing, a game of immortals and social interaction, right up my alley. As far as my players go, well not so much… Still the production quality was terrific and it was hard for me to put it down.

The idea of Dungeon Decks, sets of cards to create old school type adventures intrigued me. They are a cool way to generate ideas and get your creative juices flowing. WEGS Old Skool seemed like a tribute to old school gaming but integrating elements like cards into the game to make it more accessible for newer games. It looked simple and fun and I almost got it. This is one I am sorry I did not go back to the booth to get. I may yet order this.

The booth for tiltfactor was play testing a zombies in the office game which seemed promising if a little rough around the edges. Their Pox board game caught my eye specifically because they have lessons plans to use it in the classroom. But these are not strictly role-playing games and I am going off topic here. I hope to tackle other types of games and other goodies I found at Gen con on my next post…