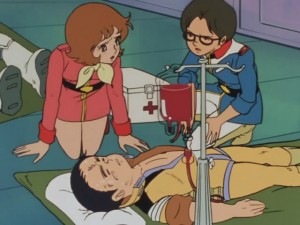 When last we left our valiant adventurers, they had climbed Mt. Doom and were about to toss the Ring into the giant Volcano… wait… think that is a different story.  Ah yes! Now I remember, last time, in the Quest to Turn My Wife into a Roleplayer we had finished character creation and I pondered what kind of game we were actually going to be playing. I decided that I wanted to start up the game before my wife forgot what kind of character she was actually playing (in case you may have forgotten, she is a Hare Clan Smith trained by the Oriole Clan; interest include money, sweets, men, and she is afraid of bugs).

I only did some very light prep for the session, most of which actually entailed me writing out her character sheet in very big color-coded numbers so that she would be able to quickly remember where the numbers she needed were.  I didn’t include stuff like Wounds on the sheet, since that probably wasn’t really going to be an issue.  In fact, the sheet really became a very boiled down version of the game, primarily limited to just Rings, Traits, and Skills accompanied by Advantages, Disadvantages, and School related benefits.  I also just jotted down for her the damage on her Katana and her armor (just in case I decided to endanger her life).

We started out short game with a very brief explanation of the rules.  This explanation took no more than 2-3 minutes. Mostly, it simply entailed explaining what kind of dice we would be rolling, the Roll and Keep system, how to read XkY, and about TN’s.  The basics of the system for L5R are really pretty easy to learn, even for someone who is totally unfamiliar with gaming.  Really, L5R is very lethal, and rather complicated, when you get into the very, very fine particulars, however, from the big picture, it is actually one of the simpler systems out there.  The wife had no problem with the explanation and had the basics of the system down without really having to say anything twice.

I started the session off by having the young Hare Clan smith be hard at work, making a Katana.  We roleplayed through her crafting the sword, and I had her roll the dice a few times, against some low TN’s to see how well she managed to put the sword together.  She followed this pretty well, and we ended up deciding that she made herself a fairly standard Katana using basic materials, though the sword was noticeably cuter and prettier than a normal one.

A wandering samurai happened to notice the fine work as he passed by.  I really didn’t define the setting or describe the location where she was crafting the sword, though I guess I kind of imagined it as something like an open market place where various other merchants and craftsman were also hard at work.  The samurai kind of saw what she was doing and decided that he was very interested in obtaining the sword for his son, a Bushi-to-be. However, while they were in the midst of conversation, they were ambushed by a group of thieves trying to steal the sword (probably to sell it and make some money later on). However, her faithful yojimbo (me) popped out of nowhere to help save her.  Between the two of us, we took down the thugs in a couple hits and that was about it for that.

However, after the battle with the thugs, the samurai that was interested in the sword explained that he no longer felt comfortable doing business out in public, or doing business personally.  He had a member of his house come and pay for the sword later, since Samurai aren’t really supposed to be dealing with money and what not.  After she got paid, Ofumi decided it was time for some drinks; aside for some very noisy patrons who happened to get in the way of getting her buzz on, the night was uneventful.The game continued with a hunt for some sweets the result of which was that she overate, landing herself in a small hospital run by an old woman and her older husband.  However, inside the hospital, an even more wounded samurai lay bleeding on a hammock with a pretty gross and disgusting chest wound.  In the morning, she woke to find that the samurai had run away, retreating into a nearby forest for some odd reason.  In exchange for a one year’s supply of some of the delicious Manju that the old woman at the hospital was making, she agreed to go find the samurai and bring him back so that they could take proper care of him.Venturing forth from the hospital, she made use of some very rudimentary investigation skills, by noticing the blood and footprints leading into the forest; quite obviously, she followed these in the hopes of finding the wounded Samurai.  However, the forest was a very dark and creepy place.  She had to struggle very hard against her fear of insects in order to keep progressing.  This wasreally fun to roleplay out; because my wife is also afraid of bugs, it really came naturally. She freaked out really well as I described things happening in the game, such as her character walking into a Spider web, or having a moth fly around her face, or having a praying mantis come down and land on her shoulder.  These little minor details had her pretty good and petrified.  Later on, as she moved deeper into the forest, she was met by her trusty Yojimbo who had been following her tracks, just as she had been following the tracks of the wounded samurai. It was perfect timing really, because a group of 4 bandits, denizens of the forest, ambushed the pair, attempting to take revenge for the thieves that had fallen attempting to acquire the sword she had manufactured.

Two of the bandits were quickly cut down by her trusty Yojimbo.  She laid one of the bandits out by throwing a bunch of Manju in his face then following up with a very swift punch, breaking his nose.  The Yojimbo chased down the final bandit in order to bring him to justice.

This is where I really started to have fun. Instead of just slicing up the bandit that had attacked her, my wife decided that she didn’t want to pull her sword on this guy and instead wanted to have a conversation with him.  We roleplayed out her talking to the bandit and trying to figure out why he was so bad.  I had her roll some dice to see if she was going to believe the lines he was feeding her; the funny thing is that the dice said she was very trusting.  He told her that he had 15 children and that in order to feed them all he had to steal to make a living; the local daimyo was taxing him so badly that he didn’t have enough money earned from farming to get by.  This was all of course a total bunch of bull, but it turned the encounter into a really fun time. It ended even more interestingly by having her hire the bandit to track down the samurai for her (she was tired of being attacked by all the pesky bugs and was not interested in fighting anything of the giant insect variety).  The man accepted the offer and in a rather odd change of character, faithfully tracked down the wounded samurai, who wasn’t all that far away, and brought him back to Ofumi.  Her faithful Yojimbo carried him back to the hospital where the Old Doctor Woman was prepared to operate on him.  Ofumi collected the first installment of her reward and the game was over.

That was all we got through with our first session, but in session 2, she will get in closer with the samurai and maybe meet some other new players in her little adventure.

I really think that the first Session of our little game went very well.  The entire thing lasted about 30 minutes.  I really think the only problems we had were with keeping our voices down while we were roleplaying in order to keep from waking up the napping child.  He has a tendency to ruin any chance of rolling polyhedrons.  Also, the dice rolling was kept to a minimum, mostly for the same reason; rolling dice, even on top of books, can be pretty noisy and I have noticed that is definitely a trigger for our son to spontaneously wake up from a nap prematurely.  Other than that, I was really proud of how well my wife did, not only from the “understanding the rules” side of things, but also from the roleplaying side of things as well.  In fact, she did very well with playing her character.  She had a lot of fun with it, I think, and I did too.  I don’t think she is ready to call herself a gamer, or will be saying that anytime soon, but I think she will be happy to give Session 2 a try, just as soon as we have spare time. Stay tuned for Part 4 where I talk about our second session (just as soon as we have it).

I might not be done with Fate after all