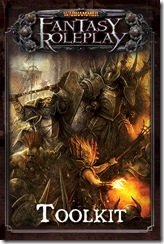 As you probably know I’ve finally given in some time ago and bought the latest edition of Warhammer Fantasy Roleplay, a game I have been criticizing for quite a long time. But after reading the rules myself I can say some of my fears and criticism have been unfounded. WFRP may not be your father’s WFRP but it’s still a roleplaying game, and it’s even crunchier than I expected. The dice pool system using custom dice also adds a layer of complexity to the game, that I hadn’t anticipated. But that’s a story for another day…

But the fact that you have to use custom dice is certainly a drawback, especially when you lose dice or if anyone wants to have his own dice. One solution is to get the Dice Accessory Pack. But if you own an iPod Touch, iPhone or iPad there’s now an alternative: the aforementioned WFRP Toolkit.

The app looks very much like any other FFG product: polished, great artwork. And for $2.99 it’s surprisingly cheap (for an FFG product). Aside from beautifully rendered and animated dice, you get a roll log, extensive statistics and full documentation.

If you own WFRP and an iPhone, iPod touch or iPad you might want to check this out!