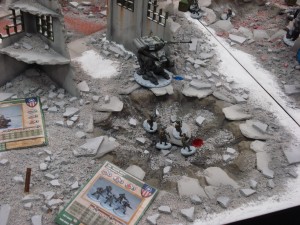 And we are back… Welcome to part 2 of my Gen Con retrospective. When we left our brave traveler he was in the midst of the four best days in gaming, Gen Con! Ok let’s get back to business.

I am primarily a role-player, while I dabble in the occasional board game and played some CCGs back in the day, there is nothing I would rather do that chuck dice and tell a story among friends. So you can imagine role-playing games were my primary draw at Gen Con. I did not even visit the wargaming and board games area until Saturday. I did not see the card games at all (sorry CCG fans). However I did see some very interesting games of the strictly non-rpg variety in the exhibit hall and got to demo a couple of them.

Fantasy Flight Games was there, talk about beautiful games. The number of FFG bags around the convention was outstanding. I was particularly impressed by their Dust Tactics demos. I just watched but the miniatures and terrain that drew me in seemed to be part of a fun game that made me want to play. 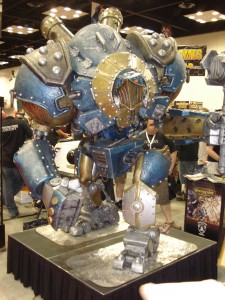 Privateer Press was there promoting their Warmachine game and they had an awesome life-size (I guess) Warjack. There were some interesting variations on old classics, like Metal Gear Risk and an anniversary edition of Strateggo. Mayfair Games was there en force! I also saw lots of people playing Settlers of Catan, and I imagine some were playing Puerto Rico. A board game based on my home country, that I have never played.

WizKids was there, with their HeroClix minis, and the preview of Paizo’s heroes set. There was the announcement that they will be doing collectible pre-painted miniatures, Pathfinder Battles (must fight the lure of plastic crack), they had a set of LotR Miniatures I knew nothing off (goes to show you what I know!), but what impressed me the most was Star Trek Feet Captains. The game looked incredibly entertaining and the miniatures were gorgeous.  And there is a Munchkin Conan expansion coming out… How cool is that? ‘Nuff said!

But these were games or companies I knew about to an extent. There were some nice new discoveries during the convention… 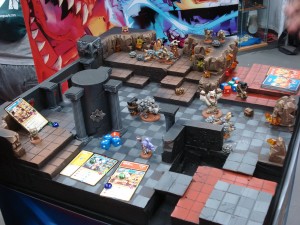 Super Dungeon Explorer from Soda Pop Miniatures was a fun romp, reminiscent of 8-Bit games of old. They were running demos and you could pre-order the game at Gen Con. True that the miniatures I played with were painted and the terrain was constructed for the demo. As I understood the game comes with a two dimensional board and some of the minis we played with were form a future expansion, still this was fun!

All you need to know about your character is in a card (I played a sexy purple haired super-deformed sorceress), the game uses custom colored coded dice and as you gain treasure they are coded so as they are placed around the character card. The game ran smoothly and I could hear myself humming the theme of games like Zelda and Dragon Knight. The company was demoing other games as well, but alas I did not get to play.

I don’t paint miniatures but I saw some incredibly detailed miniatures, many painted beautifully. I was impressed by Enigma Miniatures, the Cool Mini or Not booth had some terrific miniatures and some great pieces. They were doing some Sedition Wars demos that looked intriguing, alas I did not get to play!

Wyrd Games has their Malifaux game miniatures. My friend PJ (@luniticus) had told me about them and while I have not played it I did get to see the Puppet Wars game he purchased which looked like a lot of fun. And then there were the Terraclips by World Works Games… Modular buildings that require no arts and crafts skills to put together. Despite salivating over them all weekend I ended up NOT getting them and I am sorry I did not. When all the sets are put together they look amazing. 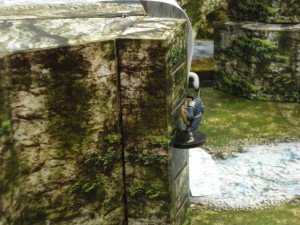 Fat Dragon Games was displaying their sets. They even had a terrain set with a cliff that included slots for miniature bases to simulate climbing. I am always tempted but know that I have little skill or patience to put them together. And they seem easy enough, but I will not devote the time or effort necessary, easy as they may be. My lazy ass needs Dwarven Forge! Just like the last time around I must have gawked at their sets for a while. Getting them at Gen Con was impractical in terms of transporting them back home. I visit their site every so often and fantasize (no not that kind of fantasy get your mind out of the gutter) but have never ordered any. 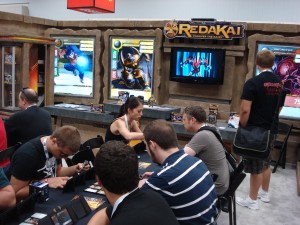 Last but not least, there was a Redakai game, I had NO idea what it was but the figures (action figures?) they had on display looked pretty so I had to take a picture…

Well I think I have rambled enough about games and minis. There were other things that caught my interest and that I ended up buying during the convention, but I’ll save the details of that for my next post. Got to hold something back to keep you coming for more, see you in a couple of days!