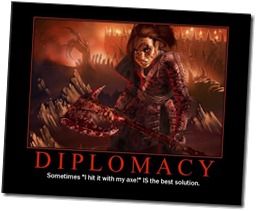 I have been roleplaying for about two decades now but there’s still one thing that causes me headaches as a GM: social conflicts. Usually when player characters act in a roleplaying game, it’s their characters’ skills and abilities that count, not the skills of the player. But when it came to social interactions I often let the players’ skills trump the character’s abilities.

I know that I am not the only one who handles it that way. But that way of running social conflicts actually makes it harder for people who are not that outgoing or not that great with words to enjoy roleplaying games. After all it’s supposed to be a roleplaying game and not an acting class. But on the other hand it’s undeniably cooler if the players act out social conflicts and interactions instead of just rolling the dice and stating their intention.

So what can we do to solve this issue? In order to keep things fair you should probably start by following the rules. Most roleplaying games have some elaborate system for social conflicts or at least a few social skills you can use. When a player enjoys acting out these scenes, you should allow him or her to do so (if the rest of the players approves). Some games allow you to grant experience points for good roleplaying or there’s some other metagame currency that can be used as a reward.

Of course in games where there are no rules for social interactions at all, like in the old editions of D&D, it all comes back to acting it out and letting the GM decide. But in most modern games it’s probably better if you use the rules as written to decide the outcome of all actions and let the players act out conversations, social conflicts and the like, if they enjoy doing so.

How do you handle such situations? Have you done the same mistake as I did, or do you have an ever better method to handle this? Please share your thoughts and experiences below.