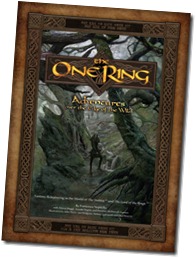 J.R.R. Tolkien’s fantasy epic “The Lord of the Rings” is undoubtedly one of the most influential novels of the 20th century. It was one of the major inspirations for a lot of the fantasy novels, comics, movies and games that followed, including 1974’s Dungeons & Dragons.

Alas most attempts to bring Tolkien’s saga to the tabletop were not that successful. Both ICE’s Middle Earth Roleplaying Game and the more recent game by Decipher didn’t really capture the mood of the books. So, when Cubicle 7 and Sophisticated Games announced that they were working on a new game using the Lord of the Ring license I was highly skeptical. The fact that they wanted to limit the scope of the first game to the Wilderlands didn’t actually help to get my hopes up either. Basically I actually expected the game to fail.

But boy, was I wrong! Before I go into detail of what the game’s about, let’s have a look at what you get when you buy The One Ring. Instead of one of the currently popular boxed set, you get a sturdy slip case containing two softcover rulebook (one for the GM, one for the players), two 22” x 17” maps and a set of customized The One Ring Dice. Yes, even the dice are included! Even though the rulebooks are softcover only, they are of pretty high quality and in full color. The maps feel pretty sturdy and look just brilliant. The production value of this game is exceptionally high and I am sure even die hard collectors will be more than pleased.

Let’s have a look at the books now. The 192-paged Adventurers Book contains all the rules needed by the players. Aside from an introduction into the scenario, it contains all rules needed to create characters and play the game. The 144-paged Loremaster’s Book contains an introduction into what the Loremaster’s job is, the game mechanics, Corruption rules, a bestiary, details on the campaign and a fully-fledged out introductory adventure. Both books contain an extensive index and are lavishly illustrated.

The One Ring: Adventures over the Edge of the Wild is the first game in a trilogy and focuses on the Wilderlands, only a few years after the Battle of the Five Armies. But even then peace is a fragile thing and the Wilderlands are still in need of heroes to help to maintain peace and fight the growing darkness. 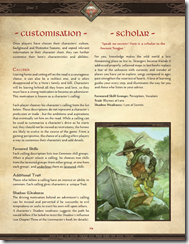 The players can choose from six cultures of the North: the Bardings, the Beornings, the Dwarves of the Lonely Mountain, the Elves of Mirkwood, the Hobbits of the Shire and the Woodmen of Wilderland. People who want to play Elves from Lothlórien or Men from Gondor will have to wait for one of the next part of the series. In my opinion even Hobbits seem to be a bit out of place here, but having a Lord of the Rings game without them would be a bit odd.

You also get to choose from several callings that include the Scholar, Slayer, Treasure Hunter, Wanderer,and Warden. You might have noticed that there’s no Wizard calling, and that’s actually a good thing in my book. The world of Middle Earth is full of magic, but it’s not the kind of magic we are used to from games like D&D for example. Most magic comes from the world itself, or is bound to items like magic rings or weapons. In The One Ring magic appears in the form of Cultural Virtues, like the Dwarves rune cutting skills or the magic of the Elves, but it’s not even close to throwing fireballs around.

The rules system is pretty easy to learn, but still has a certain depth. Character creation is pretty fast and straightforward, but still allows for a certain level of customization. What I like about The One Ring a lot is that it should be very easy to teach the game to new players. You don’t need to read the whole book to do character creation and the core mechanic is easy to learn. Task resolution checks involve rolling the 12-sided Feat die plus a number of 6-sided Success dice equal to the rank of the skill used. The results are added together and are compared with a target number determined by the Loremaster. When the feat die comes up with a 12 or 1 (the Gandalf rune and the Eye of Sauron respectively on the custom dice that come with the game) special effects may be triggered. 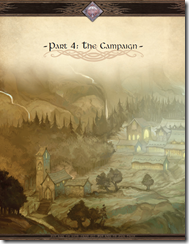 What I like very much about the game is the way the Shadow affects the heroes. By experiencing distressing events, crossing areas tainted by manifestations of the Shadow, by committing despicable deeds or by taking possession of tainted items, heroes gain Shadow points. When the amount of Shadow exceeds a character’s Hope score, he or she becomes Miserable. A character in this condition may be prone to bouts of madness. And every time that happens heroes acquire Flaws. That mechanic perfectly simulates what has happened to several characters in the book. Just think of Boromir as he tried to take the ring from Frodo.

The other subsystems of the game are also very much in line with what you expect from a game that is set into the world of Middle Earth. Instead of just taking a generic fantasy game and adding some Tolkienesque trappings, the authors really tried to capture the mood of the books.

Another neat aspect of the game is that gameplay is divided into an Adventuring Phase and a Fellowship Phase. While the Adventurer’s Phase is driven by the Loremaster’s storytelling, the Fellowship Phase is fully player-driven. The player characters usually return to a place they have already visited to rest and recuperate. This phase is also used to develop characters, buying new equipment etc. In the default pacing of the game the heroes undertake one adventure per year, then they rest for a full season and return to adventuring in the following year. So a whole campaign may easily span many years, even decades.

I have to admit I haven’t run or played the game yet, but I very much would love to do so. The One Ring is actually the first roleplaying game based on “The Lord of the Rings” that I feel like I could run without Tolkien turning in his grave. The limited scope of the setting makes things much easier, the heroes are not fighting against unbeatable odds and the background information included in the book help you to get into the right mood for the game. The game even gives you some tips on how to handle the canon.

All in all I am very happy with how The One Ring turned out. From the rules to the artwork it just feels right. The presentation is top notch and everything I’ve read was pretty close to the source material. The One Ring is a game I definitely would recommend to my best friend – and that’s what I actually did!

You can get The One Ring – Adventures over the Edge of the Wild either as a print+PDF copy from Cubicle 7 directly for %59.99 (which I highly recommend), or from DriveThruRPG as a digital download for $29.99.

By the way, Cubicle 7 recently released a free adventure scenario for The One Ring on DriveThruRPG called “The One Ring: Words of the Wise”, which is definitely worth checking out.

Instant soundtrack for your Cthulhu campaign