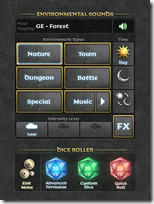 I often use music in my roleplaying games to help set the tone. As one of my players said recently: “The worst in these horror games of yours is not what happens in the game, but that dreadful music!” And even if it doesn’t sound like it, he meant it in a good way.

The right music can definitely help to immerse your players into the game world. Adding some sound effects to the mix sounds like a cool idea. I remember that a friend of mine used sound snippets recorded from movies in some of his games. Back in the day he used his desktop computer that was connected to his hi-fi system.

DMDJ is a pretty cool iOS app that comes with a plethora of background sounds, music and special effects that you can play directly from your iOS device. As you can see on the first screenshot (which I made on my iPad) the interface is looking pretty clear and you can trust me when I tell you it’s very easy to use. 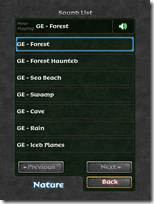 Using the big buttons you choose among several environment types like Nature, Town, Dungeon. Usually each environment type gives you several options to chose from. With the Intensity level buttons you can change the intensity from Low to High. You can also switch from Day to Night.

What I like a lot that aside from shutting down the app you’ll never have any sudden changes in sound or music. The app uses cross-fading whenever you change the settings. The only thing I find a bit annoying is that a change from day to night and vice versa is accompanied by a jingling sound.

The app also allows you to play music. Alas you can’t play music from your library but you are limited to the music included. There are several genres to pick from and each genre contains quite a few tracks, but I still would have preferred to play my own music instead. Perhaps this feature can be added in an update.

The FX feature lets you play short sound snippets like a laugh, a monster’s growl or a magic effect while the environmental effects and the music are still playing.

There’s also a dice roller included. I have to admit that’s probably the feature I won’t use that often if at all. I prefer to throw real dice around. But you can set up custom rolls/dice as well and this could be quite handy. You could even set up your own random encounter tables for example.

All in all the functionality of Blueface Games’ app is pretty good. But alas there are some issues, too. The first problem I encountered was on my iPad (1st generation). Whenever I pressed the Music button the whole UI was messed up and that feature was completely unusable because of that. When I recently updated my iPhone 4S to iOS 5.1 I had the same bug on my iPhone 4S, too. Restarting the device didn’t help, but luckily a complete reinstall of the app did the trick. I also encountered a lot of random crashes on my iPad.

But these minor issues aside, I like DMDJ a lot. It’s easy to use, offers a lot of bang for the buck and might be a great app to add that additional oomph to your games.

DMDJ is an app for the iPhone and iPad by Blueface Games and is available from the App Store for $2.99.

The future of roleplaying #2