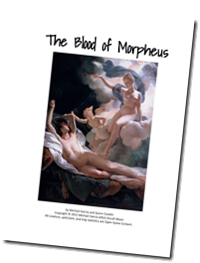 My good friend and former contributor to this blog, Michael Garcia of Occult Moon, has some serious medical issues and at this moment the medical bills are becoming a real problem.

In order to help to pay for medical expenses he created a small supplement for d20 or OSR games that give you rules for opiates use an abuse and several dreamscapes to throw at your players.

The PDF for “Blood of Morpheus” is just $3 and every purchase helps him pay the bills. If you’re more generous you can also donate a few buck using ChipIn. Thanks.

For more details check out the official “Blood of Morpheus” site!

PDF version of Airship Pirates is now available on RPGNow/DriveThruRPG