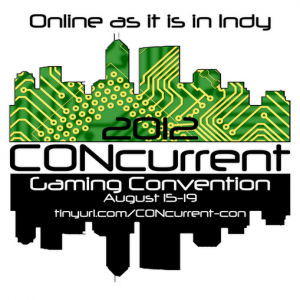 And just what is CONcurrent you ask? It’s an online convention parallel to the best four days in gaming taking place in Indie. CONcurrent is the brainchild of Daniel Pérez, aka Highmoon. Like many of us he won’t be able to make it to Gen Con this year, but he doesn’t want to miss the experience of sharing with other gamers who are equally enthusiastic but can’t make the trip. Thus the idea of a virtual convention was born.

It will be held from Wednesday August 15 to Sunday 19 and its being coordinated though a Google+ page and the Con Planner tool provided by the fine folk at Fear the Boot. I’ve already begun planning my participation. Right now it’s a Savage Worlds sci-fi game via Google+ hangout Saturday night and an off-site activity, a Beer Tasting Meet and Greet to be held at a soon to be determined location in Puerto Rico accompanied by a Google+ Hangout to share the experience with other CONCurrent participant.

I’m also interested on hosting two panels, one on Hispanic Gamers and another one on Campaign Longevity, but I am looking for others interested in participating and helping. If either topic interests you be sure to leave a comment so we can get in touch. I’m on Eastern Standard Time but we can accommodate with scheduling during the weekend.

If you can’t make it to Gen Con, or are intrigued by the possibility of a virtual con, want to run a game or simply want to game or join a panel, drop by the CONcurrent Con Planner page and join the fun!

See you all in August…

PS – There is another virtual con coming up next week, Indie+, here is their official page and their Google+ page in case you want to participate.