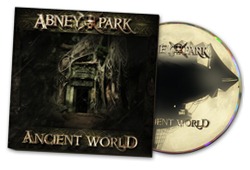 Abney Park’s Airship Pirates is a unique roleplaying game that combines elements from Steampunk with a post-apocalyptic setting and is inspired by Abney Park’s music. In September last year I interviewed “Captain” Robert Brown of Abney Park and Peter Cakebread and Ken Walton of Cakebread & Walton. One of the questions I asked Captain Robert back then was if he plans to release some of  their music without vocals (I find them distracting while running a game) so that it could be used as background music for the game. Here’s what he said:

An album full of versions of the music with the singing removed could work, and wouldn’t be a ridiculous about of work. Writing a score from scratch would take as much time as writing a whole album. I think I have more then a few fans that would be pissed at me writing music without having more of the lyrics that created this world in the first place. Actually, now that I’m thinking about it, your really asking for an album of Abney Park Easy Listening music. I’m not likely to make that. =8;)

But when Abney Park released their latest Album “Ancient World” a while ago, they just did that. Aside from the normal album you can also get an Instrumental version, that can be used for Karaoke or as background music for your game! How cool is that?

The Instrumental version of album is available as MP3 download for just $7 directly from the official Abney Park store.