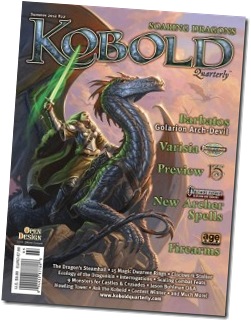 Summer marches onward, scorching us with unrelenting heat. My only relief is the Summer 2012 issue of Kobold Quarterly. It has a pretty wicked cover of a dragon and its rider, and has “Preview: 13th Age” right there. Promising stuff. There is even a Castles & Crusades article, for the old school among you. Let’s see how it measures up.

Right out of the gate we have a very strong article about the Bearded Lord of Avernus, the uppermost layer of Golarion’s Hells. I am not well-versed in Golarion lore, so it is appropriate that Barbatos is the gatekeeper. Barbatos’s domains include Evil, Law, Magic, and Travel. Travel is what interests me most. His temples are animal graveyards, crossroads, stone circles, and unmarked graves. An interesting mix, to be sure, and it could offer up some excellent opportunities for side encounters during a campaign.

In my review of KQ’s previous issue, I said that when something mysterious is laid bare, it loses its allure. I don’t feel that happens in this article. We learn about Barbatos’s allegiances, rivalries, and some of his methods, but it does not delve too deeply into his history or his life in Avernus. More generally, it is not an ecology article. Much of the piece discusses Barbatos’s cults, haunts, and servitors (the utterly disgusting edavagors).

Dragonkin by Brian A. Liberge, art by Russ Nicholson

I’m going to talk about the artwork of this article for a moment: it’s so weird! Initially, I thought it was awful. Yet there was a certain meticulousness to it that fascinated me. The colors are very vivid. Then it occurred to me this is almost the exact same reaction I had to what is now one of my favorite comics: Orc Stain by James Stokoe.

What I’m saying is I’m glad I gave Russ Nicholson’s art another chance; he’s a talented illustrator and you should investigate his work.

As for the article itself, well, I confess I am a little confused. Do player races not get ability score bonuses in the Midgard campaign setting for 4th Edition? Are the dragonkin already detailed therein? I found no information about the race other than racial powers. They are neat, but I was left wondering what I’m missing out on. Other than this quibble, the dragonkin are suitable as a dragon-like race.

(Author’s Note: As mentioned in the comments, there is a sidebar suggesting you use the dragonborn as a base race and substitute one of the racial powers. My own reading of this sidebar interpreted it as a secondary option, leaving me wondering what the primary one was.)

Weapons for a New AGE by Rodrigo García Carmona, art by Guido Kuip

I am not the target audience of this article. I have developed an easy way of including guns in my fantasy RPGs: erase “crossbow” and write “gun” in the equipment section of your character sheet.

There appears to be a large subset of players, perhaps even a majority, who want complex, self-harming methods of using firearms in their games. Reading this article, I have come to simply accept that. If you are one of these players and you enjoy the AGE System (it’s pretty cool), then this is an excellent article for you. The firearms have just the right risk of misfiring, they take major actions to reload, and there is a talent you can take to circumvent these inconveniences. Rogue and Warrior specializations—the Gunslinger and Thunderer—spice up your options by offering different, interesting paths on your way to ranged mastery. Whether you want to be a debonair pistol packer or someone who totes a miniature cannon, I believe these are sound choices. I’m quite impressed by how much the AGE System has taken off.

Blood Brothers (David Schwartz, art by Storn Cook): A Pathfinder archetype for two rogues to take, which helps them work together. I always regret that I can never seem to find other players who want to build characters using these sorts of neat, creative options.

The GM’s Influence on Character (Monte Cook): Monte proposes that characters who are built tend to have less soul than characters who develop over time, and gives a bit of advice on how to fix that. I have quite a few thoughts on this, so stay tuned.

13th Age: The Escalation Die (Rob Heinsoo, art by Aaron McConnell, Lee Moyer): The d6 escalation die steps up each round, adding to the PCs’ attack and damage rolls. Some characters get more badass beyond the 3rd round. I like this idea, and I like how some monsters can scale the die back. Rob gives advice on how to incorporate this mechanic into other systems, but the more I read about 13th Age lately, the more excited I get!

And, uh, more! Check out the issue yourself. You can purchase it directly from the KQ store as a printed magazine plus a PDF for $8.99, or just the PDF for $5.99.

What about the Coliseum Morpheuon? A review…

Destiny As A Tabletop RPG?