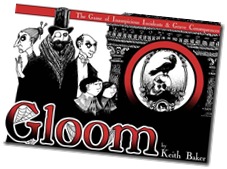 I am currently taking a break from DMing and that’s one of the reasons why my gaming group decided to try out several board and card games. One of the games I recently purchased and which is in my opinion perfectly suited for roleplayers is the card game Gloom. I learned about it from Wil Wheaton’s YouTube series Tabletop (which is highly recommended). Directly after watching the show I ordered the game online and we tried it on the next meeting.

So what is Gloom about? In Gloom each player controls an eccentric family of four or five people. The goal of the game is to make the other player’s family members as happy as possible while making the life of your own family as miserable as possible before eventually killing them off one by one.

This is done by placing the transparent cards on top of the family member cards that not only describe what happened to the person but which also modifies that family member’s self-worth. Multiple of these modifier cards can be placed on top of a family member and the modifiers to self-worth are either obscured by a new card or show through.

There are also cards that allow you to remove cards from a family member, kill him or her, etc. The game ends when one player managed to kill his or her family. The player with the most miserable family wins the game.

While this is a lot of fun by itself, it get’s even more fun when you describe what happens to the miserable family members while you place cards on them. That way very funny (and sometimes sad) tales are spun. In my experience especially roleplaying game enthusiasts enjoy this part of the game.

Gloom was designed by Keith Baker and is published by Atlas Games. If you are looking for a fun (and morbid) card game for 2 to 4 players, you definitely should pick Gloom up. There are also a couple of expansions available including a stand-alone Cthulhu-themed Gloom game.