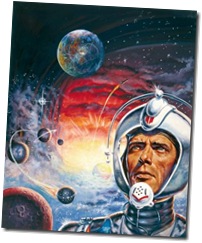 Perry Rhodan is definitely my favorite SF series. Even though it’s pretty unknown in the US it is the world’s largest SF series. It has been started in the 1960s by two German authors in the form of dime novels which were (and still are) published weekly. Today a whole team of authors works on the series. This Friday Perry Rhodan #2664 will be released. The series spawned several spin-off series (like ATLAN, Perry Rhodan Action, Perry Rhodan NEO), one crappy movie, several computer games, board games and two roleplaying games. Alas both roleplaying games were not what most roleplaying Perry Rhodan fans have been hoping for.

The Perry Rhodan universe is huge, complex, but could also be a great place for roleplaying adventures. So it’s no surprise I tried to run a RPG campaign based on my favorite SF series for many years now. Alas this is much easier said than done. We already established that the two official Perry Rhodan RPGs (both are out-of-print now), are not really that great. So I am looking for other systems I could use. I have thought about using Open D6 or Savage Worlds, since I have experience with both systems and both systems are quite versatile. But they might not be versatile enough for the Perryverse.

One of the main issues the series always had was that during it earlier years each author tried to outmatch his colleagues with descriptions of exotic aliens, bigger spaceships, and more deadly weapons. Over the years several attempts have been made to “nerf” things, but a few extremes still exist.

There is one aliens species that can turn their bodies into an almost indestructible material at will, think faster than a computer, run over 100 kilometers per hour fast, eat rocks, etc. And there are descendants of human settlers who shrank to about 11 centimeters due to their stars’ radiation over centuries. Both species are very popular with fans and a Perry Rhodan conversion should be able to handle both characters. The image below shows members of each of the aforementioned species. 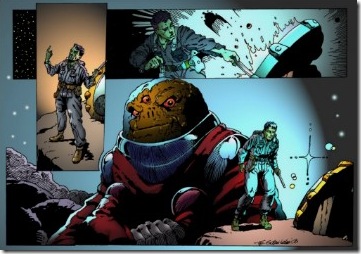 Because of these extremes using Savage World’s Super Powers Companion might make sense, or I should have a look at fully-fledged superhero games. Another trope of the Perry Rhodan series are characters with paranormal abilities from telepathy to teleportation. So the more I think about it using a superhero system might make a lot of sense.

Another issue is technology. A Perry Rhodan game is only half the fun if you can’t use all the nifty space ships, guns, space suits, computers, etc. described in the novels. In some cases things might be pretty easy. Even though there are various kinds of hand weapons in the series, most can be easily converted to any game. A gun is a gun after all. It’s more complicated to model the protective shield technologies or the space ships. With space ships ranging from small one-person vessels to huge spheroid space ships with diameters of 2500 meters and more, you need a system that can handle this scales easily. 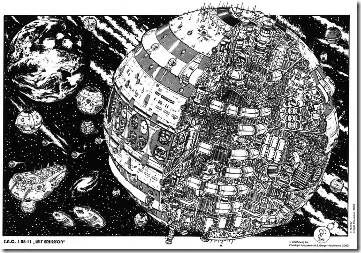 Last but not least anyone interested in converting the Perryverse to the tabletop should decide which era he or she wants to play in. The series spans at least millenia with a few trips beyond that using time travel. Creating a roleplaying game conversion that is able to portray the series from the moment when Perry Rhodan first landed on the moon in 1971 to the events in the latest novel which is set into the year 5056 is probably impossible.

Another possibility would be to run a game set into the Perry Rhodan NEO universe. PR NEO is basically a reboot of the series which tries to avoid some of the issues the original series had. Alas the NEO universe is still very small compared what the original series has to offer. I am still not sure what would be the best course of action. If you were in my shoes, what would you do? As always every comments is highly appreciated!

Some news on Open D6