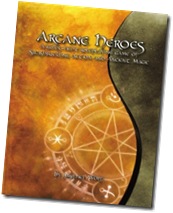 In November 2010 I released a 5-paged rules-light RPG called Arcane Heroes. In Arcane Heroes the player characters are members of ancient bloodlines during an industrial revolution. It uses a simple dice pool mechanic for task resolution and contains everything you need to play the game.

The game was created in less than 24h and is probably still a bit rough around the edges. Recently I have been thinking about revising and expanding the rules. There’s also no setting to speak off, so there’s another aspect to improve on. But before I start working on a major overhaul of the game, I am looking for feedback of people who actually played Arcane Heroes.

If you have played Arcane Heroes or even just read it thoroughly, could you please give me your feedback? Are there any rules that are broken. Do you feel that there are certain things missing from the game? Please share your thoughts below!