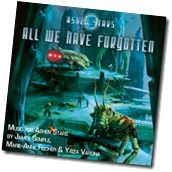 A couple of days ago Pelgrane Press released music for Ashen Stars created by James Semple, Marie-Ann Fischer and Yaiza Varona. The same team has been responsible for the awesome Eternal Lies Suite (one of my favorite horror soundtracks) and they definitely don’t disappoint with their latest work “All We Have Forgotten”.

The album contains 10 original tracks and 4 stings in MP3 format. I just got a copy of the album and will post a review as soon as possible. But from what I’ve heard so far, it’s just awesome and well worth the cost. If you’re interested to learn more about “All We Have Forgotten” (or listen to a sample) check out this post on the official Pelgrane Press site.