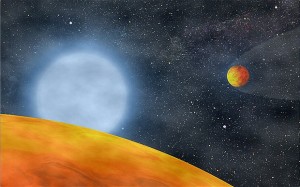 The National Game Design Month ends in a couple of days and I fear I will not be able to fulfill one of the requirements set by Nathan Russell when he conceived the contest. But I am actually not worried about this at all. I might even turn this defeat into long-term success and take my time to finish writing the first draft of the game.

Over the last few weeks Galaxy Rising has become much larger than I anticipated. Participating in this year’s NaGa DeMon helped me to get excited about a project again. I am actually very happy with the progress so far. The core rules are basically done. Of course I still need to add stuff like special rules for spaceships and character advancement and come up with stats for the alien species in the setting, but aside from that the mechanics dubbed Galaxy Core should be fully playable.

The setting still needs a lot more fleshing out, though. I have a lot of cool ideas but I haven’t written them down yet. This will probably take a couple more days at least, if not weeks. I could hurry to get things done, but at this moment I actually prefer to make a proper effort and not rush things. So, in a way you may consider Galaxy Rising a failure at least when the rules of NaGa DeMon are concerned. But I consider it a success. I almost got the game done in one month and I still have a lot of energy to keep on working until it’s finally done.

What are your thoughts on the subject? As always any comments are highly appreciated.