“Hello, my name is Roberto and I’m a Game Master…” 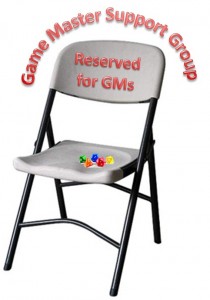 Game Mastering is a special burden, a badge of honor to some, a constant headache for others. Despite exceptions like Fiasco most role-playing games require a Game Master. Whether you are a GM that plans ahead every detail of the session, or a fly by the seat of your pants improv GM, you are an integral part of the game experience.

When I talk to players seeking games I often hear, “We have a group, but no GM.” Or, “No one wants to GM.” I have no study or hard data, but from simple anecdote I get the feeling most people would rather be a player than a GM. And that’s understandable. When you are a player you get to be one of the protagonists of the adventure. The perception is that being the GM is all about the metaphorical heavy lifting.

And it is! Don’t get me wrong, in most systems the brunt of prep, expectations of mastering the rules, and the responsibility of coordinating things so that everyone is having fun in the game falls squarely on the GM. It is important to know that you are not solely responsible for it, it takes all members of the group for things to go smoothly, likewise it’s important to know that as GM this is not solely your story, this is the groups endeavor, and you need to take into account everybody’s expectations.

The secret is communication, open and candid, but respectful and mindful of the feeling of others. If you do that, your game will improve. But even when this happens I keep talking to fellow GMs who are unhappy or frustrated by their role. Why?

It’s no secret I prefer being a GM. I’ve written about it before. It was what I first did when I played an RPG and I became enamored by the magic of telling a story with my friends. I’ve done it for most of my gaming experience, and if I must choose between being a GM or a payer, the first option always wins!

If you become a GM ask yourself an honest question, “Is this something I want to do?” If the answer is no, well don’t. If the answer is “I’d rather not, but the group has no GM.” Well you can do this for a while, talk to your group, rotate GMs, and make some sort of arrangement so that the brunt doesn’t fall on just you. If the answer is HELL YEAH! Well then you are set.

Even if you love being a GM, there are going to be bad days, complications and frustrations. There are times when you’ll say, “I don’t want to do this! I quit…” I wholeheartedly understand. Don’t give up. That’s what this support group is here for.

(I’ve been at this for a while and I’ll tackle some of the most common complains I hear. I hope other GMs can chime in with their advice and if you have any specific question, worry, or complain, feel free to leave a comment.)

“I feel frustrated!” This is a very common comment I hear from fellow GMs. And it runs the gamut from the adventure didn’t go as I plan, the players wrecked my adventure, to I’m convinced my players hated the adventures.

My best advice, relax, it’s a game! If you worry yourself about it too much the game will never be good enough for you. Being a GM is part storyteller, part control freak, and we often construct the idea of how a session will run in our minds, and believe me, no plan survives the players. Not unless you railroad them to death.

There are a hundred things that can go wrong in a game, and some will definitely will. It’s easy to replay that moment over and over in your mind, and forget about all the other things that went right. So my best advice is, don’t take it too seriously. After the game do something that separates you from the game, don’t dwell. Take a bath and go to bed, watch a TV show NOT related to your game, read, have a soothing tea. Whatever helps you relax! With a little perspective it will not seem as bad.

This may seem like a little contradictory, but, always be critical of your GMing. If you can detach from the game, once you’ve given yourself some space, consider what you could improve. We can all be better, so look for what you think could improve and take steps to do so. Talking to your player helps, be upfront about it and ask for feedback. If you know that just after the game you’ll be raw to criticism, do so later, and use social media or an e-mail.

But do this incrementally. If you try to solve every problem at once you’ll be overwhelmed. For example you feel as if you don’t do enough voices for your NPCs and believe this would improve your game, don’t try to do this for every NPC next session. Perhaps identify an important NPCs, a recurring character, a hireling, and try it with him or her. The old adage of baby steps applies here.

If you feel like you plan too much, maybe you do. It depends on group expectations and styles. And this is one of those things that get easier with experience. BUT my advice is, plan for a game like you plan for grocery shopping. What do I mean by that? Unless you are really obsessive compulsive (and that is not meant as value judgment) I doubt most people plan a visit to the grocery store with so much detail that you know the number of steps from entering the store to the exiting it once you are done, or make a detailed map of how you will navigate the store.

You need a list of what you plan to buy, equivalent to an adventure outline, a budget, which would be a plan for the opponents the players will encounter, resources you need for the adventure, specifics items for the system, all this depending on the game, and the desire to go shopping. And by shopping I mean running an adventure.

When you get to the supermarket myriad things can happen. You may find that something you needed is not in stock, there may be a special you just can’t pass up, or a strange mist may descend upon the store and you need to fight unknown creatures to survive. Ok, maybe not that last one. But the thing is you have to think on your feet, but about the minutiae, not the big details, those are on your list.

The list may be more detailed or less detailed depending on your GM style, and the changes you make along the way should be based on player feedback, how the game runs and all those little bits that pop-up and you cannot possible plan for.

Another bit of contradictory advice. Be forthcoming with your players if there is a bit of the rules you just don’t understand. Don’t be afraid to ask for their input. But by the same token don’t become the deer in the headlights! Roll with the punches. Part of being a successful GM is bluffing, making it seem like you planned for the unexpected. That may just be your biggest tool…

My last bit of advice, listen to your players, they will let you know what they expect by what they say to you, and to each other, don’t be afraid to go with it. The game just might be better for it.

I admit I’ve felt frustrated with a game one time or another, and will again, but I typically deal with it successfully following this advice. What works for you? Hope my advice on dealing with these situations is useful. Thanks for reading!

#GMwisdom, musings of a Game Master!