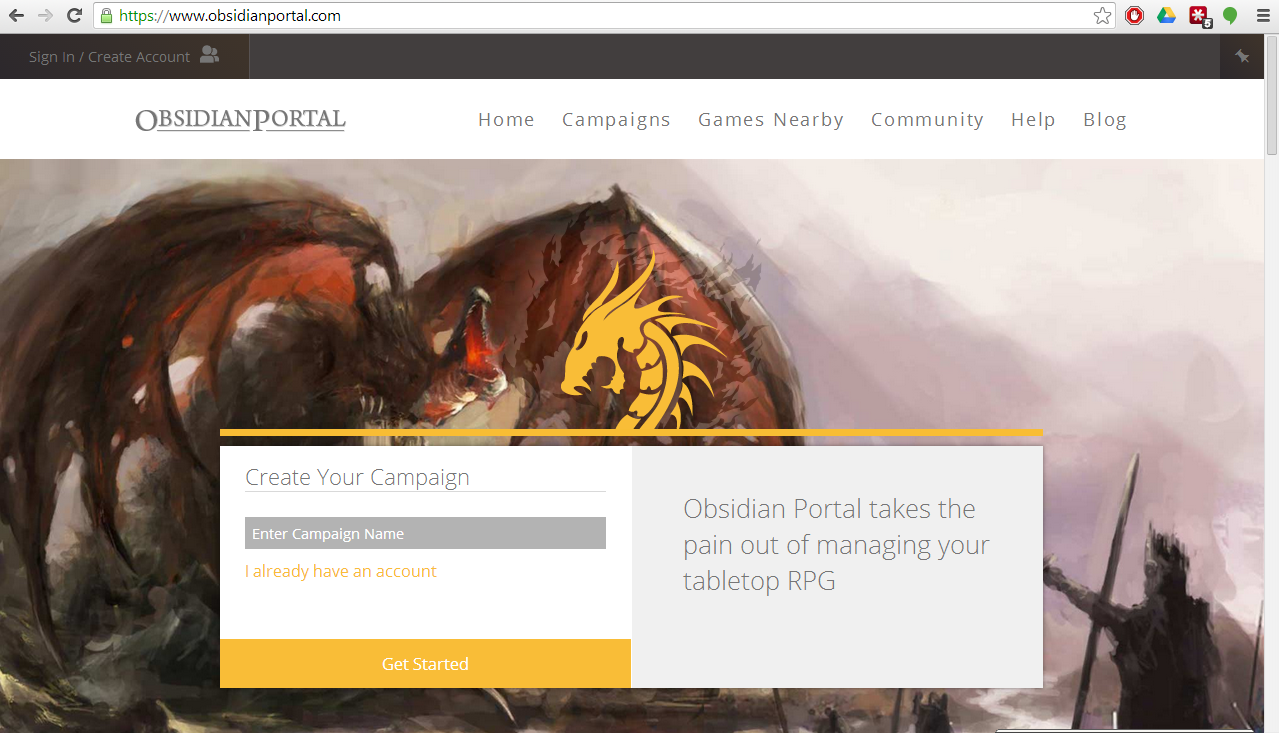 A while ago, Obsidian Portal has undergone a massive relaunch. The way the site looks and works has changed tremendously. Earlier this month I have been contacted by the people running Obsidian Portal and was asked if I was interested in reviewing the site. I have played around with Obsidian Portal in the past, but never done anything serious with it, so I decided to use it for releasing my Fallout Fudged rules.

So what does Obsidian Portal offer to its users? On OP you can create a site for your campaigns which features a blog (called Adventure Log), forums, a wiki, a calendar for scheduling game sessions, digital character sheets and many more. Alas the forums and calendar are for paying customers only. And if you don’t pay for OP’s services everything you create is public.

Luckily upgrading to the so-called Ascendant Membership is not that expensive. After a 15-day free trial period, you pay $4.99/month or $39.99/year. This is actually not that expensive, especially when you use what OP offers you extensively. Personally I haven’t decided yet if I am upgrading to Ascendant or not. It depends a lot on whether I get my players to sign up or not.

When you first sign up on the site you realize how beautiful everything looks. The OP team has done a great job making the site look very professional. Alas everything looks pretty cramped on laptop computers. The new site was definitely designed with high-res displays in mind. But this is only a minor issue.

Creating a new account and setting up your first campaign is extremely easy. OP even allows you to sign up using Google+, Twitter or Facebook, which always comes in handy. Generally the site is easy to use. Understanding how the wiki works and how you can change the look of your campaign site only takes a few minutes.

Alas there are some rough edges to the software OP is using. I repeatedly tried to upload a new avatar image and it didn’t let me. I got no error message, but the new avatar just didn’t show up. After a while I realized the file may have been to large, and tried a smaller version. This worked perfectly. It still would have been nice if the software just told me what was wrong in the first place.

Another problem is the Markup language the wiki uses. While it’s simple to use, it caused a lot of issues when I copied over text from Google Docs. Every time I wrote something like “+1” the wiki thinks I meant to have the following text underlined. There’s probably a way to fix that, but I wasn’t able to find out how.

In general OP works like intended and it’s pretty easy to set up a great-looking site for your campaign including a wiki. The minor issues I found while playing around with OP will hopefully be fixed in the future, and are definitely not deal-breakers to me.

If you are looking for web-based tools to organize your roleplaying campaign you definitely should give Obsidian Portal a look. You can use it for free and even use the 15-day free trial before having to become paying customer. And even then about $5 a month are not much considering that you would have to invest more time and money if you had to pay for web hosting and set up a blog, wiki, forum etc. yourself. Over the next few weeks I will probably continue sharing my thoughts on OP with you, so stay tuned for more!

Off to Gen Con