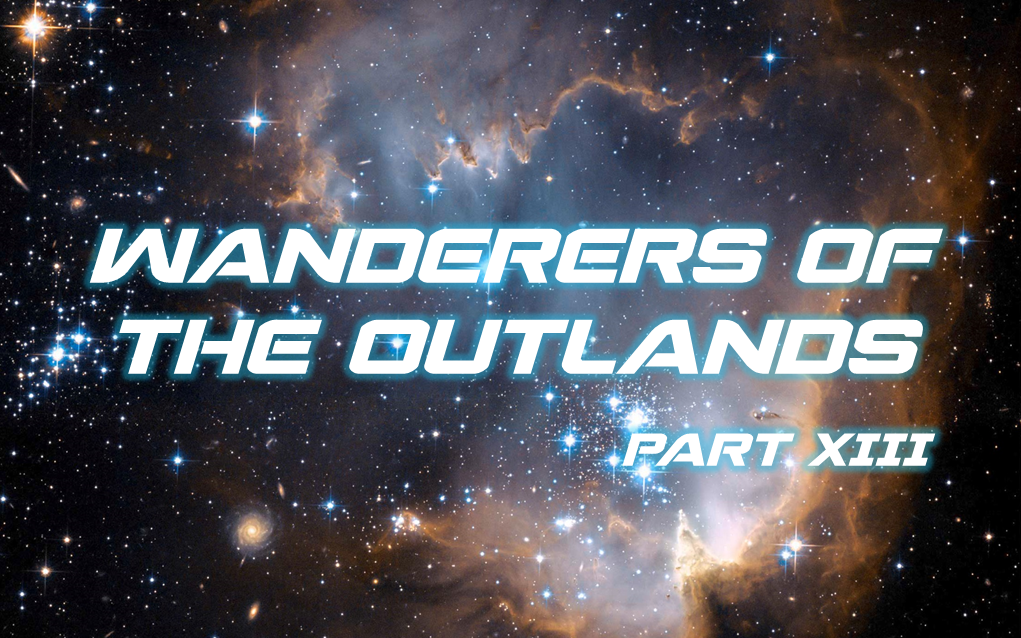 Lucky number 13! You’ll find no triskaidekaphobia here… I’m thrilled to keep on sharing the background to my Savage Worlds sci-fi campaign with our readers. This week it’s the first part of a piece of fiction I wrote to introduce the players to NPCs and places they will meet and visit over the first few sessions of play. I hope you like it and come back for the second part next week. As always, feedback, criticism or any other comments are welcome. Enjoy!

“The Sarkov Star System began as a ‘leper’ colony, places were the unwanted or undesirables were left to survive as they may. The corps eventually turned it into a medical research facility in the fringes of known space, a place where the most extreme experiments were carried out. Liberated after the Great War it became a renowned medical facility and research site in the Outlands, from cybernetics to pharmaceutical manufacturing for the protectorate.”

Stories of the Outlands Part I

Marshall Petrik looked around the blast site. The air still stank of fire and she could taste the ashes. She squatted, her helmet under one arm, and ran her finger through the residue, rubbing the tips of her gloved fingers together she felt the coarseness and when she placed them under her nose she could smell what was there, but also what wasn’t.

The blast had destroyed the dividing wall between the two high security storage areas, leaving a gaping hole out into the night through which she could see the city of Samhitha. Marshall Petrik saw the other skyscrapers and the hover cars darting around them. Samhitha reminded her of a core world sometimes. It was one of the most developed colonies out in the foreboding morass of crime and corruption that was the Outlands, but the Sarkov System colonies had grown rich with medical development and treatment. The system had the only accredited medical school out here in the frontier and the best medical facility in eight quadrants. It was a choice assignment, a key sector in what passed for civilization out here. But in the core hovers would not fly about at dangerous speed in area such as this, much less near a crime scene. Laws would not be flaunted like that, crime would not be tolerated.

A curt cough broke her concentration. She righted herself, the man standing by the door dressed like a doctor, acted like a doctor, but his eyes betrayed him. He gazed covetously at her. The uniform she wore was neither flattering nor pretty. Form fitting more out of necessity than anything else, but her boots, vest and shoulder pads concealed her femininity. She still wore the uniform, even after leaving active duty in the Union Armed Forces and becoming a Commissar out here in the Outlands.

The doctor wandered into the room, what remained of it. He extended his hand and shook the Marshall’s while simultaneously scanning her identification with his other hand, examining the details silently in his data pad. Nonchalantly the doctor added, “A Union cavalry uniform?” trying to justify his lingering stare. Marshall Petrik stood almost at attention as memories and instinct clashed for a moment. “Indeed,” she replied, “3rd Hover Bike Cavalry Division. Saw action at the battle of Largengast. We rode in and took the corporate holdouts out before infantry moved in. I kept my number and color as part of my commendations.”

The doctor looked up from his data pad and lazily walked about the blackened room, “Security forces have gone over the scene already. They determined it was terrorism, former corporates spreading hate and intolerance. We appreciate your help Marshall Petrik but as you can see…” She crossed the room in a few quick strides and stood very close to him, a good head taller than the man. She barked out, “What I can see is your incompetence doctor!” She ripped the identification bar from his lapel and read the small engraving. “Dr. Marceau… As head of medical research and manufacturing you are tasked by the Union with observing and enforcing regulations. Union patent inspections have fined you on more than one occasion, and I’m sure you would be closed up if we had enough personnel to comb through your financial records.”

The man seemed to shrink, from the corner of her eye Petrik could see the Sarkov Security Officers right outside, but they did not dare interfere. As she spoke she poked Dr. Marceau in the chest, “During the war my Cavalry Division would have a tech tearing this blast site apart. Back in the core, a proper investigation division would have their scanners all over this. But here, here I am the law. Your soldiers for rent have no official jurisdiction; here you answer only to me!” With each poke the man edged further and further back. Suddenly he was standing by the very edge of the blasted wall opening out into the night. The wind whipped his coat and his eyes widened with fear.

Marshal Petrik grabbed Dr. Marceau by his lapel and pulled him back in. “But I don’t need scanners doc. No chemical sniffers or spectrum analysis projectors, all I need is this.” She poked him in the nose. He looked cross eyed down at his nose and her finger as if he had discovered them for the first time.  She put her soot stained gloved fingers under her nose and sniffed exaggeratedly, “Do you smell that doc. It’s all prefab concrete, plastic crating, painting, but none of the chemicals you reported in this storage area. If they were destroyed in the blast there would be noticeable traces in the ashes. And the blast, it would have been far greater with that chemical mix. The building would have no south face.”

She wandered around him towards the door, the security officers outside instinctively taking a step back. “And here, the access panel, it has been tampered with. Professionally I may add. Don’t look so surprised, in the Cavalry we were trained in infiltration.” She turned back towards him and stared, her cold blue eyes hard and unforgiving, “This was an inside job. Very expensive chemicals and materials easily used to make non-patent drugs, very profitable in the black market, all gone. This is your responsibility doctor.”

He stumbled, tried to speak, and under her stare simply remained speechless. “You’ll pay for this doc. I just can’t prove it yet, but I will. I will track the components down and I’ll tie them back here. Then you’ll stand trial for this, along with your compatriots. Mark my words.” Dr. Marceau shook visibly, he seemed about to cry. “Don’t insult my intelligence doc. Just don’t go very far. If you run the Union will place a bounty on your head, and you’ll wish it was a bounty hunter after you when I find you!”

She pressed a concealed control in her glove and strode towards the hole in the far wall. The wind began ruffling her blond hair and she donned her helmet. Suddenly the roar of a hover bike filled the room and her military model bike, reminiscent in its general outline to the sharks of old Earth, came to a stop and hovered outside in the night. Tightening the strap on her helmet and lowering the visor she mounted the bike and smiled at Dr. Marceau, a dangerous predatory smile. Marshall Pretrik’s hover bike roared off into the night.