Before everything else, a quick tropical storm Erika update: I’m ok! You can sleep better knowing I will finish my posts for #RPGaDay2015. Here in Puerto Rico we were lucky the storm was disorganized and ended up moving south of us. We have various municipalities without power, there was some flooding, but we didn’t suffer any major consequences. Erika is now moving towards our neighbor the Dominican Republic; I hope they are as fortunate as us. Sadly, the effects of Erika were terrible in Dominica… Predictive models have it arriving in Florida as a hurricane, everybody stay safe! Now, on to the post… 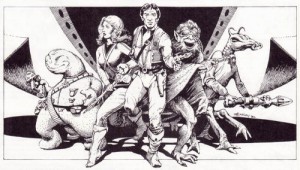 This game has made previous appearances this year for #RPGaDay2015 as well as last year, Star Frontiers. This game was my first sci-fi game after playing D&D, I remember getting the box, coloring the dice with the crayon, and it was an easy transition from fantasy to science fiction. Through high school I played as much Star Frontiers as D&D. It was my first long term sci-fi campaign. I played a solo game with a neighbor for months; we played it at lunch in school for about two years. I even had two parallel campaigns running with intertwined storylines. 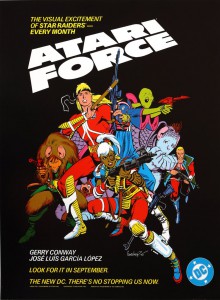 I integrated ideas from Atari Force, lots of NPCs looked like characters from Marvel comics at the time, they were NOT the characters, but I used the art as reference. Back then before the Internet I didn’t have Google to look for references imaged. I would cut out images from magazines, use tracing paper to copy art from the Official Handbook of the Marvel Universe and them draw sci-fi uniforms on and use them as NPC portraits. This was one long uninterrupted campaign that lasted almost four years. Sadly we never finished the story. The players were on their way deep into Sathar space to confront their enemies once and for all, and we never played that…

I hate unfinished campaigns, but back then in the early 1990s, we were in a gaming binge, we’d jump from new game to new game and we simply abandoned Star Frontiers. I’ve considered going back, but the players all moved and left the island. I’ve also toyed with the idea of running a Star Frontiers game again, but despite my fond memories of the rules, I don’t know if I could use them as is.

Besides I’ve used many of the ideas from that campaign in an Alternity sci-fi game, in my Tri Stat dX sci-fi game and a few in my current Wanderers of the Outlands game. I look back at Star Frontiers through rose colored glasses, it’s my favorite game I no longer play, but I’m happy with my current Savage Worlds campaign and it has a lot to do with the lessons I learned playing this game.

What is your favorite game you no longer play? Let us know in the comments. Thanks to everybody who reached out through social media and your well wises about the storm. See you all tomorrow!

Lazy Friday Video Post: “Making the Most of Mythic Structure”