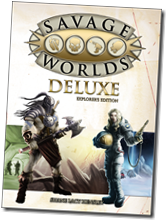 Recently I checked Pinnacle Entertainment’s new website and was surprised to see that the Explorer’s Edition of Savage Worlds Deluxe is already available for preorder. In my opinion Savage Worlds Deluxe was great but I missed the more handy digest format of the Explorer’s Edition. And because the Deluxe Edition was hardcover it was much more expensive.

The PDF version of the new Explorer’s Edition is already available from Studio2Publishing right now (I hope they put it up on RPGNow, too) and the print edition and a print + PDF bundle are available for preorder. The PDF or print edition set you back $9.99 and the bundle is $14.99. I would have preferred if the PDF was free if you buy the print edition, but the bundle price is still great.

So, if you haven’t picked up Savage Worlds yet, make sure you get the new Explorer’s Edition. I am pretty sure it will be the best edition of Savage Worlds to date.