Sorry for the absence gals and guys! After all the boasting of not giving up on #RPGaDay 2016 my three day absence probably had you thinking I had done just that. What can I say? A combination of work, an infirm elderly family member, and an upcoming important event (More on that in a future post; does this qualify as vague-blogging?) just made it impossible for me to post anything since Sunday. So I’m catching up for the last three days and today. Let’s not delay any longer, on with the last few topics for RPG a Day 2016.

August 21: What was the funniest misinterpretation of a game rule in your group?

Tough one! A rule we’ve misinterpreted as a group? I can’t think of one off the top of my head. There are individuals who’ve misinterpreted rules, often to their advantage, or because they didn’t grasp an aspect of the rules. Going over this topic I had a hard time coming up with one specific example and I called upon the collective memory of my gaming group and friends trying to come up with an example, and was reminded of an instance long ago.

In the middle of a fight a magic-user, they were called that way back then in the olden days of AD&D 1st edition; cast Water Breathing on an opponent. I was a little surprised but since it was such a large group (about 10 or 11 players) and I was trying to handle everybody’s actions I just moved on. A few moments later the player is just staring at me with a bemused look on his face and asks why the enemy is not dead. “Dead, why would he be dead?” I asked.  He smiled and replies, “He’s suffocating! He can’t breathe air anymore, he can only breathe water!”

I laughed and explained that the spell did not work like that. At least as I understood it. He argued, we went and read the spell in the Players Handbook, checked if there was a clarification in the Dungeon Masters Guide (in AD&D 1st edition the DMG had such things) and nothing. So I made a ruling that you can’t kill the BBEG with a 3rd level spell and we moved on. 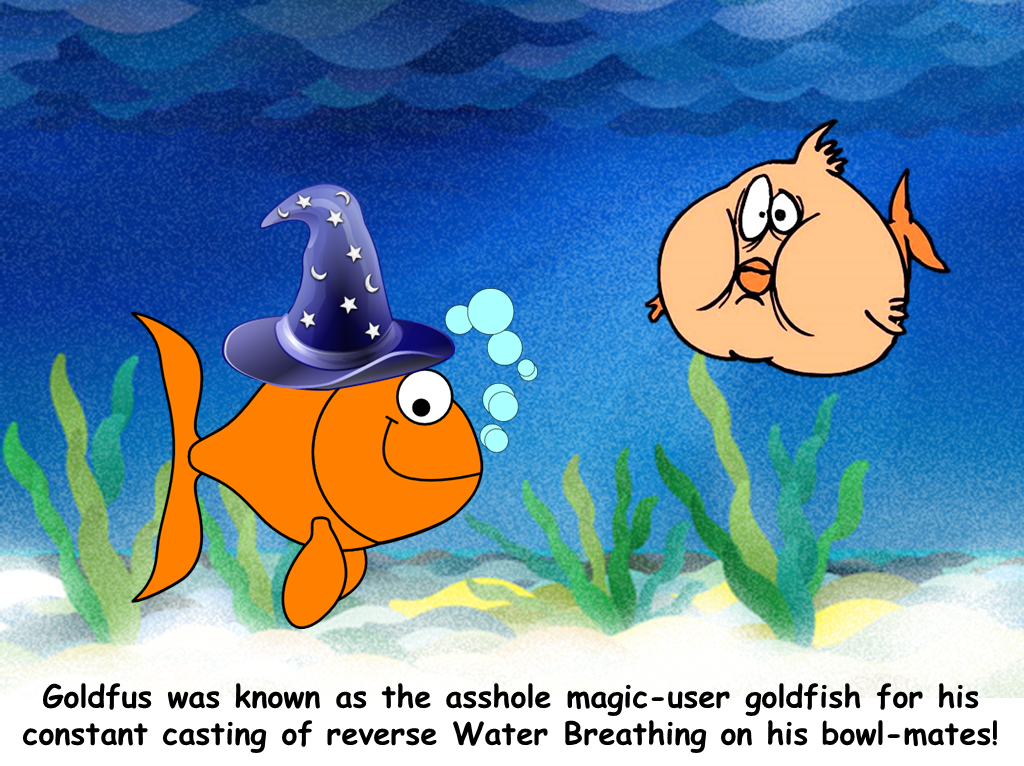 As I wrote this post I went back and checked the 1st edition rulebooks, and just as I remember there is no clarification on this in the spell description. This was back in the 80s, we couldn’t go online to check out of there was any errata, no forum to visit. It seems clear now and the spell’s entry in the d20 SRD and 5e SRD make that specific clarification. I guess my player wasn’t the only one making that assumption. It was still fun at the time!

Now, on to the next topic…

August 22: What are some random events in your games that keep happening?

Ok this, like the story above, goes back some time, specifically to the AD&D 2nd edition years of my long running homebrewed campaign. In the campaign there were some antagonists that would attempt to possess the opponent that killed them. The party’s ranger had a sword of sharpness (the kind that cuts limbs off) and a fighter with a vorpal sword (the one that cuts heads off!). On two separate occasions they both failed their saving throws against the monsters that possessed them, and their fellow party members lost limbs and heads in the process. On the next campaign another character, a cleric of war I think, with a sword of sharpness, also cut off a few limbs when under the effect of a confusion spell (that’s the 3rd edition version on that link but you get the idea).

With that very same group, late in the campaign in one of the climactic battles, one player lost his character mid-session and asked me to roll some of the enemies attack rolls and damage so he could have something to do. In the next combat they faced a molydeus demon, a nasty creature with two heads, one looked like a wolf or dog, the other was a snake. The molydeus is armed with a dancing (that’s the Pathfinder ability, but it gives you an idea what a dancing weapon does) vorpal axe. As you can imagine the player rolled a few lucky rolls and a few other characters lost their heads. To this day players are always weary of being possessed or magically forced to act against their will. 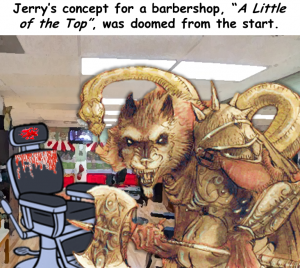 And that player, his name is Ronald Rivas, the one rolling for the demon; he no longer plays with us regularly, but sometimes he visits and I let him roll for the bad guys. It never goes well for the players!

Two down, two to go!

August 23: Share one of your best ‘Worst Luck’ stories.

There have been many occasions where the dice have betrayed me. I roll in the open, so when an antagonist rolls a 1 on the save or die spell, well there is no way around it. But my good friend and fellow GM Luis Lao told me a story from his campaign that happened last week that I just have to share!

And I apologize in advance to Luis and his gaming group (Some of which also play with me) if I misrepresent anything in any way, but I am glossing over a lot of details just to get to the story.

Like me, Luis has a LONG running homebrew (I sold him his first RPG books when I used to work at the local comic/gaming store, so I was an enabler!) and he was running his campaign last Friday when his players encountered a powerful entity that granted them a wish. I won’t go into all the details of his campaign and what he told me, but suffice it to say the asked this entity to bring the head of a powerful guild of assassins to which one of the players was beholden to and another player wanted revenge against for their actions. So when the entity brings the leader of the organization, it turns out not to be the person they thought it to be. Instead she was (and I’m quoting Luis here, he sent me the name) High Inquisitress Tyrena, Seven of Death! (He used the art on this link to show the players what she looked like.) An important political figure of a major religion in one of the nations of his campaign, a main antagonist, and a powerful enemy they suddenly had to fight.

They are prepping for an epic battle! I should tell you that they are playing Pathfinder so the rest of this makes sense. To keep whomever was arriving from escaping through magical means a character cast Dimensional Anchor on her using a ready action he had prepared. They roll initiative, she wins and casts Implosion, a nasty 9th level spell, out of the gate and things are looking dire! The next player in the initiative order takes out a greater arrow of slaying, shoots, and hits her. The GM confidently says he makes the saving throw on a 3 or more in a d20. Guess what he rolled? Yes that’s right. He rolled a 1! Combat over…

Her death had far reaching consequences, the inquisition she commanded fell apart, the criminal organization she secretly controlled is in tatters, far world altering consequences over a roll of 1 in a dice. But you know what? He wasn’t mad, he embraced the roll, and he allowed the actions of his players to change the world around them. He didn’t take success away from them he had fun doing it. That’s the spirit, turn your worst roll into a positive and let it drive your story forward. Thanks for sharing that story with me Luis. 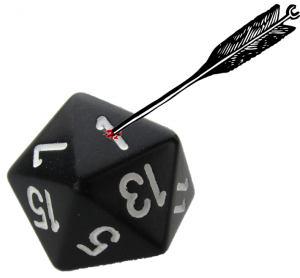 And finally, on to today’s topic…

August 24: What is the game you are most likely to give to others as a gift?

Depends on why and to whom I’m giving the gift. If it is a gift to a new gamer learning to play for the first time, my answer is usually the Pathfinder Beginner Box. I think it is one of the best entry level products produced in recent years, far superior than the D&D 5th edition Starter Set. However I think that for a new gamer transitioning from the Beginner Box to the Pathfinder core rulebook can be daunting.  The latest version of D&D is so much easier to pick up and play. So right now for a new gamer it would be a tossup, but still leaning strongly towards the Beginner Box.

For a gamer that’s been running D&D/d20 for a long time and wants to try something different, my go to gift is Savage Worlds. I know it has its detractors among my group of friends (the Luis Lao mentioned above being one of them!) but I still think it has a good mix of crunch and light rules and does things differently enough to shake people’s expectations. Besides a $10 entry point for a gaming system is hard to beat!

For someone who wants to know why I like fantasy and adventure games so much, I’d give them The Complete Elfquest Vol. 1: The Original Quest.  It is not D&D, or Tolkien, not even strictly a game, but it’s very significant to me and I believe helps people understand what I love about gaming. Before I played D&D, before I read Dragonlance, or even the Hobbit (I had seen the animated movie as well as the animated Lord of the Rings) I read Elfquest! It had adventure, drama, and an engaging backstory. Sometimes I forget just how influential Elfquest was for me. I’ve given the omnibus above as a gift three times already, and will probably do so again. 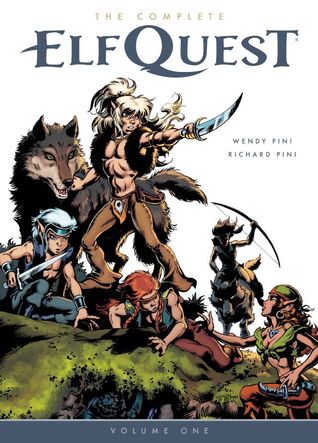 So I’m caught up with RPG a Day 2016. What your take on any of the above subjects? Funny rule interpretations that lead to bad coincidences that run so good you make gifts out of them! Tell us in the comments below. See you all tomorrow. I promise!

What about Creepy Creatures? A review!