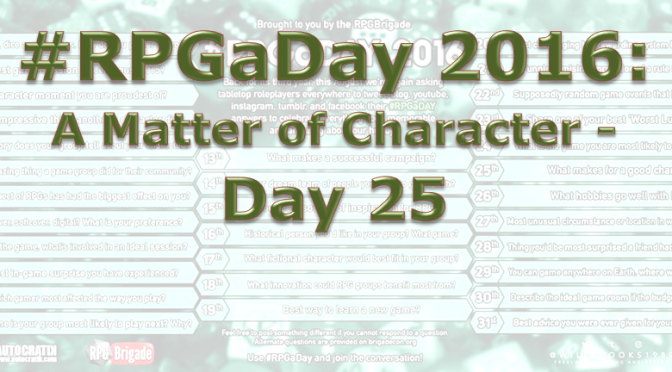 Back to our regular schedule! We’re on the home stretch. As August draws to a close, #RPG a Day 2016 is near its end for this year, and I’m in the midst of getting ready for something important. I hinted at it yesterday, but today’s not the day I’m telling you about it. Instead today the topic is all about characters, specifically…

August 25: What makes for a good character?

This question can be answered from three different perspectives, as a game master, as player a, and as a fellow player. Allow me to get a little philosophical and tackle the subject in that order.

The answer as a GM may be a little trite, as it’s usually this, a good backstory! To a certain degree that’s true, as GMs we weave stories together from the character’s backgrounds, motivations, goals and the campaign elements such as the history, the NPCs, conflicts, etc.). An uninteresting, or worse nonexistent, character background really limits the tools you have in your toolbox. Not all GMs integrate a character’s backstory into the game, but for me that’s an integral part of what makes a campaign significant for the players and interesting for me. Of course, there can be such a thing as too much story!

If a player comes to the table with a backstory that seems like the biography for a seasoned warrior, a veteran of many battles for his 1st level fighter, there may be a problem. Or a player whose backstory resembles a novel, where future events are mapped out and he or she expects you as a GM simply to narrate the story they’ve written back to them, this can also be a problem, specifically when you alter the story they wrote. But both examples are workable. Rather than ban the character’s background outright, or simply ignoring it, reach out to the player; explain your misgivings in a clear calm fashion. The interaction between a player and GM is a two way street, and both should have some input on the outcome.

As a player a backstory is important, after all I create it so that through the game I experience some elements of it, resolving some conflicts and achieve some  of the stated goals. But most of my backstory work is front loaded; it comes before the game begins. Another important element for a good character is the options the game presents to me. I enjoy developing a character, access to new abilities and new opportunities, new ways to play, it’s not about increasing in power (although many game make it about that), but about different game experiences. After all there is a game element in role playing games, and I enjoy that just as much as the role-playing.

To fellow players a good character is a character that plays well with others, who doesn’t hog the spotlight, whose player recognizes other people in the group are also part of the plot. A character created to play along with their characters and whose skills and abilities mesh well with theirs and compliment one another. Whenever I see a player wanting to play an evil character in a party of paladins, when the campaign was conceived as a fight against evil, or a Punisher loner type anti-hero rolled up in a high power JLA or Avengers supers game, I feel that character is not a good character.  It may have an exquisite background, but it makes the game less fun for other players. I’m not saying don’t play against type, I once played a non-super powered detective in a supers game, but give your character a motivation to be in the game, don’t just pass on the burden to the GM or other player’s, that’s just bad form.

RPGs are a collaborative experience where everyone is meant to have fun, and everybody should collaborate towards that end, a good character should help achieve that goal.

Agree? Disagree? Have another idea? Let us know in the comments and share the link to your RPG a Day 2016 entries. Thank you everyone for coming around. See you Friday.

Carrot on a stick! Rewarding players for creating character background.