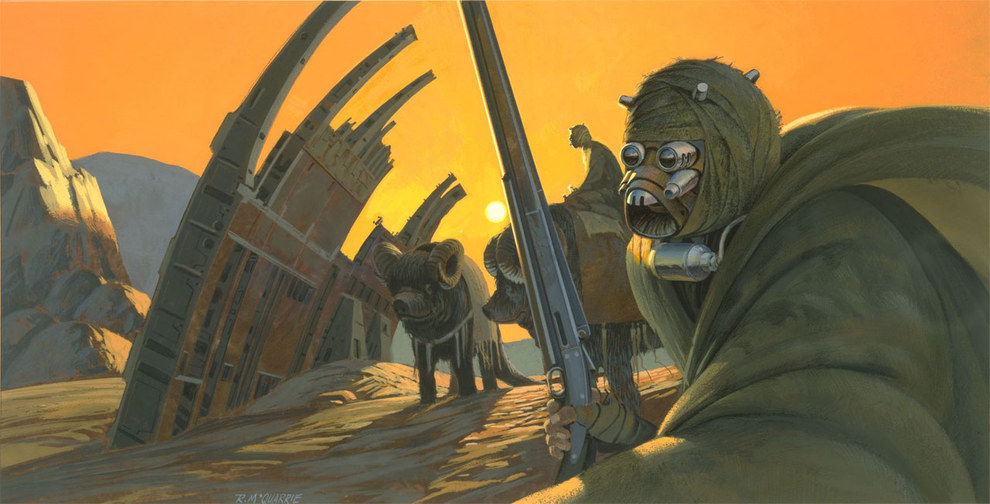 Ok, I think I things got a bit out of hand with this title, but that’s basically what I want to write about today. Let’s get some things out of the way first: I am not talking about WEG’s version of the Star Wars universe here. This post is first and foremost about the rules Greg Costikyan came up with.

The mechanics in Star Wars The Roleplaying Game 1st Edition are a successor to the system employed in WEG’s Ghostbusters RPG. In its core it is a dice pool system in which you roll a number of six-sided dice equal to the relevant attribute or skill and compare the total result to a difficulty level set by the GM. If your attribute or skill has a score of – for example – 4D+2, you roll 4 dice, add their results together and add 2. It’s perhaps a bit more math intensive than counting successes in other games, but even a first grader should be able to do it.

If you are familiar with other games using WEG’s d6 System, you’ll immediately notice a few things. There’s no Wild Die and there are no advanced skills. The Wild Die is one of the dice from your pool which may explode if you roll a 6 or bad things may happen, if it’s a 1. It was introduced to the d6 System with the 2nd Edition of the Star Wars RPG. Advanced skills are basically skills not everyone can use automatically. If you haven’t bought the skill during your character creation or later via experience, you have zero dice in it.

There are also a couple of other things which were changed in later editions. In 1st Edition movement speed for characters, vehicles etc. was a simple die code. This made running chases etc. extremely easy. Overall Star Wars The Roleplaying Game 1st Edition had one major advantage over all other editions and all other Star Wars games so far: it was extremely easy and fast to run. Later editions mostly added fiddly bit which made the rules more complex, perhaps more deep, but not necessarily better. Especially the wild die made things unpredictable and often in a bad way.

It’s interesting to note that some of the d6 fan projects floating around on the internet including the extremely awesome Heavy Gear d6) use Star Wars RPG 1st Edition as a basis instead of later editions. I guess it’s because it’s easily hackable and there are way less things you have to take care off. In my opinion the rules presented in this game were the best version of the d6 System so far. I even prefer it over the excellent MiniSix by Antipaladin Games. Sometimes I wish someone would have taken the old rulebook from 1987, strip it from all Star Wars references and release it under the OGL. This would make a perfect basis for your homebrew games.

Long story short, I think WEG got it right the 1st time with their Star Wars Roleplaying Game. Later editions didn’t make things necessarily better, but mostly more complicated. Especially Star Wars needs a fast game with a cinematic, over-the-top action. It’s also a shame that WEG later decided to base their generic d6 System books on the 2nd Edition of their Star Wars RPG. Don’t get me wrong, 2nd Edition and 2nd Edition Revised were great, but sometimes I prefer something simpler.