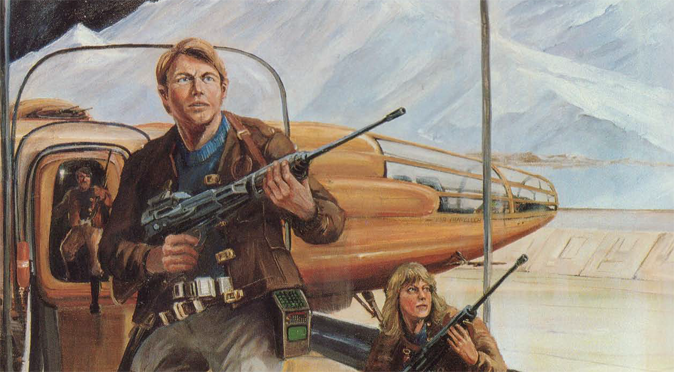 Even though Traveller is almost as old as D&D it never had something similar as the Old School Revolution/Revival community. I guess one of the reason is that even today the original editions of Traveller are still easily available. You don’t need to rely on clones if you have the real deal just a few clicks away.

In my opinion the best way to get your hands on Traveller material is to order one of the CD-ROMs directly from Far Future Enterprises. At the time of this writing they sell about 20 different CD-ROMs which contain basically a whole game line each. Each CD sets you back $35 plus shipping and is chock full with stuff. Aside from Classic Traveller you can get basically every edition of Traveller released (aside from Traveller Hero) and including other GDW games like Twilight 2000, Dark Conspiracy, and 2300AD.

Today the postman brought me the Classic Traveller CD-ROM I ordered a while ago and it contains all the core rules, supplements, adventures, double adventures, alien modules, modules and boardgames released by GDW for Traveller back in the day. Even the original little black books from 1977 are included.

By the way, if you order 4 CD-ROMs from them, you only have to pay for three! Please note that the $35 rebate is a manual process, so you have to pay the full price first, but then Mr. Marc Miller himself will refund you $35 as soon as the CD-ROMs are shipped.

The scan quality of the PDFs varies a bit, but overall the quality is very good. And it’s definitely more cost effective than trying to get all Traveller books on eBay. Selling RPGs on CD-ROM might be considered a bit weird by some, especially in this day and age, but it works and is definitely the easiest way to get your hands on a lot of gaming material for less than the price of a contemporary core rulebook.

UPDATE: I just had another look at the FFE site and noticed that Traveller HERO and GURPS Traveller are now available on CD-ROM as well!