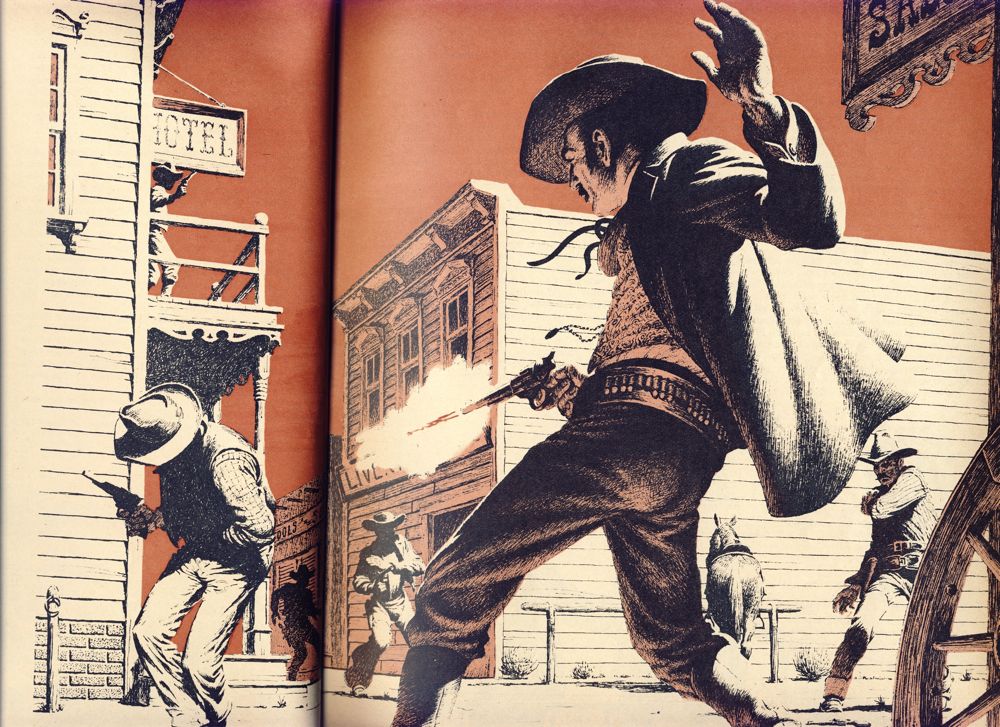 I finally get to talk about my proposed combat system!

First off, I have been trying to think of a decent working title for the game. Not just the game but the core set of mechanics. It is my longer term goal to not only create a Wild West game but use the same core system to tackle many genres. It came to me the other day while walking the dogs that a pack of cards used to be referred to as the devil’s staircase. I think the allusion is to a fanned deck being stepped and that playing cards was a road that could lead to gambling and all sorts of vices. It was my grandmother that I can remember calling them the devil’s staircase.

So how about a combat system.

What I want to achieve is a way of handling combat that is as fast or faster than real life or movie combat. I suspect that that is not going to be quite possible but that is the objective, speed and ease of play over detail and granularity of the rules.

Before starting with actual combat I want to think about wounds and death.

So far I have been using the Endurance stat for pretty much everything relating to skills, fatigue and so on. I want to keep this consistent. So every player is going to put their best stat in Endurance because it is just going to make you the most functional of characters. That is not min/maxing, it is plain common sense. I am proposing that if you take a wound then it reduces your current Endurance by 1. The most common value for Endurance is going to be 10 as there are 13 cards in a suit and 4 of them have a value of 10. We have to plan on the target having a 10 Endurance. Simply reducing Endurance by 1 for every hit means that you could empty a colt .45 into an big old cowboy and not never kill him. That cannot be right. So I am going to add an additional modifier here. If cause a wound using a picture card then it does 2 points of Endurance damage. Statistically, emptying a six shooter into someone would do an average of 5 points of damage but could do as much as 12. In all the westerns I remember watching the heroes all managed to survive being shot and the big bad guy often took many bullets to put down.

What we also need is a method of ‘one punching’ someone. I don’t like instant kills, which is unusual coming from a Rolemaster fan(!) I guess. What I do want is the ability to knock someone down and out in a single hit or shot. That is what heroes do in the movies all the time so PCs and arch villains need that ability.

Right at the start I said that if a joker is drawn then it is noted on the character sheet and a replacement card drawn.

We can now start to make use of jokers. You can choose to replace any card in your pack with a joker. If the joker then does a wound it will knock out the victim. That is an automatic one punch but does not kill. The victim is unconscious, Mind you if they were on the walls of a rocky box canyon then fall might do for them!

So let’s have a look at combat.

The iconic gunfight in the wild west has to be the two gunslingers in the middle of the street. Who is the fastest on the draw? This will be a simple skill resolution, draw a card and add your Speed stat. Highest total is the faster gun. Not every bullet will hit. I am imagining there being about 25 yards between shooters. At that sort of range the total Stat (or half stat for unskilled shooters) plus card must exceed 10 to hit. A +1/-1 for ranges +/- 5 yards. So a shot from 50 yrds would require a target number of 15. A point-blank shot would be 5 or more to hit.

If both skill tests pass with the same number then the shoots draw and fire at the same time. If they they both total over 10 (adjusted for range) then they both hit. A number card results in a single point of damage, a picture card gives 2 points of damage or if one or both play a joker then the victim’s Endurance is wiped out.

It is not always the case of both shooters are going to stand there and make themselves a target. In that case one can try and dodge. You forgo your attack and your skill test is DEDUCTED from the shooters attack. Dodging is a good way to avoid being hit!

If the shooter’s total, less the dodgers total comes to 10 or more adjusted for range, then the victim is hit and a wound delivered.

The next exchange of fire now starts again from scratch with stat plus card to start a new test.

If the shooter runs out of Endurance cards then they may have to break off firing. This represents gun smoke getting in their eyes or the accumulated effect of the recoil. They have been probably palming back the hammer on their revolver and at some point need to stop. If you are out of Endurance cards you must take a ‘short break’ or recovery round which effectively means you miss a turn. You can move at half your normal running pace or walk but cannot dash or dodge. At the end of the short rest The GM will deal you one more card.

If you do not take a short break or recovery round you can burn a point of endurance. This reduces your Endurance by 1 just as if you had been wounded but the GM deals you a card there and then and you can play it immediately.

You can reload your revolver while taking a short break/recovery.

This is not continuous fire. So every attack is resolved as a skill test with stat plus card compared to the target number adjusted for range and the targets dodge if any.

These are treated exactly the same as guns and other weapons. I think there will be a small table of the effective ranges of weapons before range bonuses and penalties start to apply. This will help differentiate different weapons.

These are exactly the same as ‘Picking Different Targets’ above. The only other consideration is that there will be no ammunition so fights can go on a long time. The same rules apply for when the combatants run out of Endurance cards. They can take a short break/recovery or burn Endurance to keep on fighting. Combatants can still choose to fight or dodge. If one fighter is chooses to only dodge then the continuous fire rules above can be used with each punch and block being a drawn card. This can be an effective tactic if you know you have more endurance than the attacker and you want them to wear themselves out. If they start burning Endurance then you could land a single decisive blow and knock them out.

It is the attacker’s choice if the wound that knocks someone out is lethal or not. If you are aiming for a flesh wound then you can declare the shot to be non-lethal. Equally in a bar room brawl you can choose whether that last punch is intended to kill.

So that is my proposed combat system. Does it cover enough bases?

RPG a Day 2016: The League of Extraordinary Former Players – Day 14