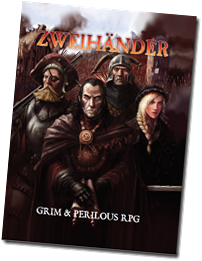 If you have been following this blog for a while you might already know that I love the old Warhammer Fantasy Roleplay Game from Games Workshop. It was basically the first RPG I played for an extended period of time, and back in the day I immediately fell in love with both its setting and the rules. So it is probably no surprise that I have a soft spot for Zweihänder by Grim & Perilous Studios (My fellow blogger Peter recently wrote an extensive review of this game here on our blog). Zweihänder is a fans love letter to this game, a 600+ pages tome which contains enough material to keep you playing for years. Zweihänder’s rules are pretty close to the 1st and 2nd edition of Warhammer Fantasy Roleplay, but also introduce new ideas. It’s not just a “retro clone” but rather a refinement of the original rules. The implied setting is basically the Old World with the serial numbers filed off, but there are also a few example settings included.

A while back, Grim & Perilous Studios’ David D. Fox started posting artwork for an upcoming project and I immediately thought: “Hey, this looks a lot like Colonial Gothic”. Unbeknownst to me David D. Fox had been working with Rogue Games’ Richard Iorio to combine the awesome setting of Colonial Gothic with Zweihänder’s rules. Personally I love this idea. I think Colonial Gothic needs more love. It is an awesome game but is often overlooked by the gaming community. Combining the setting with a more popular system could bring it into the limelight.

Ok, what is Colonial Gothic all about? Colonial Gothic is a roleplaying game set into the early years of the American Revolution. Aside from the fight against the British there’s also a secret war brewing against the forces of chaos and darkness. These might be unspeakable horrors spawned by Magick, vampires from the old world, witches, angry spirits, and many more. What sets Colonial Gothic apart is the amount of research that went into it. Some of the sourcebooks for the game can easily double as historical text books. Yes, they are that good!

I probably should also mention at this point that I also have a more personal connection to Rogue Games. I first met Richard at GenCon in 2010 and we have stayed in touch after that. Even though we don’t talk or chat as often as I’d like I consider him a friend, a kindred spirit. I also did proof reading for several of his books. Unfortunately I was never able to actually run a game of Colonial Gothic. The interest in the setting is quite limited over here in Germany.

Ok, let’s talk a bit more about the upcoming game. Colonial Gothc: Grim & Perilous RPG will be another 600+ page book. It will be an all-in-one rulebook with all-new artwork (I’ve added the example artwork from the official press release into this post). I guess the rules will mostly be unchanged from what we’ve seen in Zweihänder, but there should be new careers, new monsters, and a different magic system. While some might be intimidated by the tome-like qualities of the book, I actually applaud the decision to make it an all-in-one affair. That’s actually one of the reasons why I always preferred the original WFRP to its successors. I have to admit, I am pretty excited about this upcoming game and I really hope this will be a successful venture for both David D. Fox and Richard Iorio. I wish you guys all the best of luck!

Are we DMs really that weird?

Stargazer’s World is now on iTunes