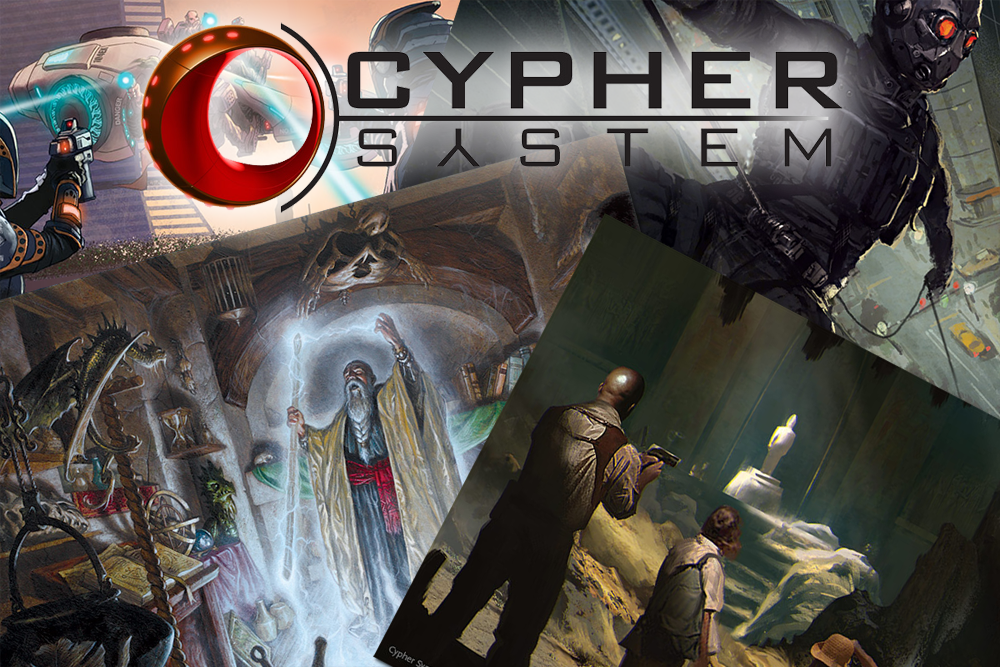 At the time of this writing the Humble RPG Book Bundle: Cypher System and The Strange (quite the mouth-full) is available for another 33 hours or so. I already owned quite a few of the books offered, BUT the included setting books for the Cypher System alone were worth a purchase.

What’s included?
As with many other Humble Bundles there are various tiers. For €1 (or your repective local equivalent) you get the following:

That’s quite the haul, BUT not really worth it if you don’t already own the Cypher System and/or The Strange Core rulebooks.

Tier 2 which starts at a contribution of €7.50 includes everything from tier 1 plus the following books:

The last tier which sets you back €13.50 or more adds the following titles to the mix:

As with all Humble Bundles you can choose how much money goes to the publisher, a charity and Humble Bundle itself.

Is it worth it?
Definitely. Even if you are not interested in the Strange, the material for the more generic Cypher System is worth it. You get four pretty fleshed out campaigns for it and a lot of supplemental material. Heck, you could get a lot of use out of the campaign settings even if you don’t like the Cypher System at all. For me, the Cypher Systems ranks among my all-time favorite roleplaying game systems.

What are the settings about?
A friend asked me to share my thoughts on the settings included, so let’s have a closer look. By the way, if you are new to the Cypher System I recommend checking out my preview of the original Cypher System Corebook and my first look at the updated one which is included in this Humble Bundle.

The Strange
The Strange is all about alternate realities. In the universe of The Strange so-called recursions exist, limited pocket dimensions which are often based on myths, legends, or works of fiction. The players are usually members of The Estate, a organization dedicated to defending Earth from the dangers of the Strange which connects Earth to the recursions. The Strange is a pretty wild setting where everything you can come up with has a place. The rules even allow player characters to freely travel between recursions and sometimes you may even transform your character while doing so.

Unmasked
Unmasked is the superheroes setting for the Cypher System. In this game you play teens in the 1980s imbued with the power to create masks. When wearing these masks these teens called Prodigies get access to superhuman powers BUT only while wearing the mask. They also not only get powers, but also effectively become someone else. But you can’t just wear your mask all day, so the player characters have to deal with their mundane lives and high school as well as fighting bad guys and their plots.

Gods of the Fall
In the Cypher System’s fantasy setting, Gods of the Fall, you don’t just play heroes or villains but gods! The gods of old literally fell from their celestial home, destroying a mortal kingdom in the process. The player characters are destined to rise above their mortal selves and eventually become gods themselves. In a way it reminds me of Exalted (ok, the players were basically demigods in this game) or the more recent Godbound by Sine Nomine Publishing. From my experience running Numenera I know that the Cypher System works very well with more competent heroes, so its a good fit for such a setting. If you are looking for a zero-to-hero experience, Cypher and Gods of the Fall might not be to your liking.

Predation
Predation is set into the future, but also in the past. In the future a corporation called Space and Time, Intg. (SATI) uses time travel technology to send scientists and other experts into the past – the Cretaceous period to be exact. Eventually disaster struck and the time-travel process broke down. Now, humans are trapped in our planet’s past and have to survive among dinosaurs and deal with time anomalies. If you have been a fan of Dino-Riders Predations is the setting for you. Personally I think its one of the more compelling settings of the bunch.

The Stars Are Fire
Last but not least, there’s The Stars Are Fire. To my surprise it not only includes a setting, but also guidelines on how to create your own Science Fiction setting even including setting-appropriate optional rules, equipment, and even vehicles, spacecraft and a bestiary. The included setting is called The Revel. In this setting Earth has been lost. The planet itself is still there but covered by black clouds. No signals are detectable from the surface and no expeditions sent to Quiet Earth have returned. No one know what has happened. But humanity survived in space, conquered and colonized the solar system and is even reaching out towards the stars with FTL-capable ships. I haven’t delved too deep into the setting yet, but the book as a whole looks like a great toolbox if you ever want to run a Scifi campaign using Cypher.

This was my look into the latest Humble RPG Book Bundle. If you have anything to add, or any questions, please post them in the comments below.