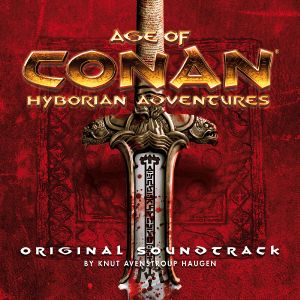 When I posted my first “Roleplaying music” article, fellow blogger Crom recommended the soundtrack of “Age of Conan – Hyborian Adventures” to me. So, I ordered the 2-CD set over the internet and yesterday I could finally listen to the first time to this great soundtrack.

The 2-CD set comes with an “Original Soundtrack” CD and a “Bonus” CD. The first disc contains 25 tracks from the games’ soundtrack, the second features three songs from the band Turbonegro, a death punk group from Norway, and 8 additional tracks from the game soundtrack. I would have preferred when they’ve put the band’s songs at the end of the CD, but since I usually use my iPod to play the background music for my gaming sessions, that’s no big problem. I will just create a playlist withouth those three songs.

The CD set also comes with a booklet containing a letter from the composer, Knut Avenstroup Haugen, the lyrics to some tracks like “Combat Reborn, III. Aquilonia” which is sung in Latin. There are also songs with lyrics in some Hyborian language (I didn’t know that they were any) and Norse. The music itself is what you expect from a soundtrack to a MMORPG that is set into the “Age of Conan”. You get a lot of pieces that are obviously inspired by the great “Conan – The Barbarian” soundtrack from Basil Poledouris, melodical pieces inspired by many different cultures and a lot of use of choirs.
I haven’t used the music in roleplaying sessions yet, but I believe it could work great in any fantasy setting. If you agreed with my other music recommendations you will surely love the music to “Age of Conan – Hyborian Adventures”.

If you want to know more about the making of the soundtrack and it’s composer, there’s a video interview with Knut Avenstroup Hagen at Ten Ton Hammer.