Yesterday I finally sat down to create my first map in Campaign Cartographer 3. I bought the software and played a bit around, but never actually made a proper map with it. Now that I am in the process of fleshing out my Dungeonslayers campaign I thought it was the right moment to learn the art that is map making.

At first, let me show you a small portion of my map: 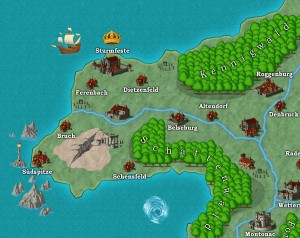 The whole map is of course much, much bigger. But this small map should give you a hint on what the complete map looks like. It took me a couple of hours to map the whole thing, but smaller maps are done in just a couple of minutes.
But I couldn’t have done it without the video tutorials at the official ProFantasy site. These videos give you a step-by-step instruction on how to create beautiful and professional looking maps.

If you are into map making you really should try CC3 out.