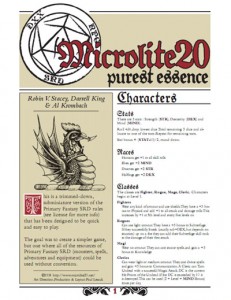 Microlite20 is a free role-playing game containing character generation, combat and rules for magic, monsters and level advancement. We have ripped the guts out of d20 leaving just the essence of the game. Skills are much simplified, there are no feats and combat is as simple as it gets.

So instead of all the retro-clones like OSRIC and the like you get a stripped down version of d20 that is supposed to be compatible with almost all existing material. So, one could for example run Eberron using Microlite20.

Paul Lessack created a beautifully laid-out version of Microlite20 that includes Character Generation, Combat, Advancement, Monsters, Equipment, Spells and the full Expert rules and GM Guide. In my opinion it’s the PDF you should download and print when you want to start running a Microlite20 campaign, so I used it for my review of Microlite20. I will abbreviate Microlite20 purest essence as M20PE in the context of this review.

The Rules
Characters in Microlite20 are described by three stats (Strength, Dexterity and Mind) instead of the usual set of six attributes normal games based on the d20 SRD use. The stat bonus is calculated as usual. Each race (M20PE inccludes humans, elves, dwarves and halflings) gets a +2 bonus to an attribute or a +1 bonus to all skills in the case of humans. There are no racial abilities. The expert rules of M20PE also make gnomes, half-orcs, half-elves and lizardmen available as well, but DMs are encouraged to cherry pick what tossiblet to include in their game. So it may be possible that your DM disallows lizardmen as player characters for example.

Classes are also simplified. There are only the four classes fighter, rogue, mage and cleric in standard M20 but M20PE adds paladins, rangers, illusionist, druids and bards. If now someone comes up with a barbarian class for M20, you would have all the options that D&D 3.5 gives you. Classes get some bonusses and some special class abilities but each class is described by just a few lines of text:

Fighters
Wear any kind of armour and use shields. They have a +3 bonus to Physical and add +1 to all attack and damage rolls. This increases by +1 at 5th level and every five levels on

There are only four skills in M20 with M20PE adding a 5th skill in its expert rules: Survival. The standard rules are Physical, Subterfuge, Knowledge and Communication and it should be obvious which skill can be used for what actions. The skill section also explains that there are no saving throws in M20 and that you can replace them by using attribute or skill checks.

Combat is a much simplified version of the d20 rules and the complete combat rules fit on less than a half page. The creators of M20 have done away with the base attack bonus, so the melee attack bonus is STR bonus + Level for all players. Critical hits occur when a 20 is rolled and they do maximum damage.

The rest of the rules section focusses on other hazards like falling damage or poisons and level advancement. Probably the biggest change from standard d20 is the complete lack of feats. This makes the game much, much simpler IMO.

The M20PE book includes a couple of monsters from an ankheg to a zombie. They are all described by a one-line stat block that includes hit dice (HD), average hitpoints, armor class (AC) and the attacks the monster can use. As far as I’ve seen there are no monsters that come with any special rules at all.

But there are rules to modify the existing monsters and even create your own ones from scratch, which seems pretty straightforward since you have just to determine hit dice, AC and weapons.

What seems a bit strange that there are actually two monster lists included in the book. One is obviously part of the standard M20 rules and the second was created later and included into M20PE. In my opinion it would have been better to combine those two lists. But perhaps that’s just me.

M20PE also includes some standard adventuring equipment packs if you are lazy or if you need some guidelines on what a character of your class may need on his travels.

The spell list are quite extensive and it seems almost all SRD spells are included. What amazes me the most is, that each spell is described by only one of two lines of text without losing anything from its original feel.

The expert rules section included in M20PE has additional spell lists for illusionists and druids.

The expert rules section includes some new races and classes which I mentioned earlier. And there are some new options for your game, like Heroism which is meant to emulate the effect of some feats by adding bonusses to certain actions once per day.

A short gamemaster’s guide at the end of the book is more or less an expanded version of the “other hazards” section from the combat rules. There are a lot of traps and poisons included that could come in handy.

How does the PDF look?

In my opinion the M20PE PDF is very well made and you can get a glimpse of what to expect from the image above. The artwork included looks like taken from a medieval book (it probably is) and the layout is very professional looking. The font used in the headings is very fitting although it’s sometimes a bit hard to read. Aside from that the presentation is superb!

M20 in general and M20PE in particular makes a good job of turning the 8000 pounds gorilla into a nice pick-up-and-play game. Most rules that make d20 complicated are thrown out but everything that makes it feel like D&D are kept in. From what I’ve seen the DM will probably be able to pick and choose what other rules from the SRD he wants to reinclude in his game with ease. You want a full skill list? No problem! You want feats? Why not! Especially if you love to tinker with a game M20 is a good basis for that.

And since M20PE is so pleasing to the eyes, it’s the perfect version to pick up for most people. The only gripes I have with M20PE is that it seems like as if someone has taken the text from a couple different documents and just did a nice layout. M20PE would have been a bit better if Paul Lessack had done some reorganising, too. But aside from that, Microlite20 purest essence is a very interesting game.