“On the Rainslick Precipice of Darkness” is an episodic adventure RPG for PC, Xbox 360 and Playstation 3 set into a pseudo-victorian world where lovecraftian horror, pulp adventures and the twisted humor of Penny Arcade mix.
In the video game the player joins Tycho Brahe and Jonathan Gabriel from Startling Developments Detective Agency, fight everything from robotic fruitfuckers to a cult of mimes (I always knew that mines are evil!) that want to summon the evil god Yog Sethis.

In my opinion the world of “On the Rainslick Precipice of Darkness” makes a perfect background for a tongue-in-cheek steampunk-horror-comedy roleplaying game using some rules-light system like Risus or PDQ. In order to give you a feel for the world I have recreated the protagonists from the game using Risus: The Anything RPG (created by S. John Ross) and even included my alter ego from the game. Enjoy! Please note that I’ve taken Tycho’s and Gabe’s character bios from the game itself.

Johnathan “Gabe” Gabriel
Bio: Believing that “all famous people start out as as orphans”, Jonathan Gabriel left home at an early age. learning to fight on the mean streets of New Arcadia, this path would ultimately take him to the top of the prizefight circuit. Everything was going great – that is, until he fought the devil. Since then, he has punched over threethousand supernatural creatures. He has even punched several ghosts, which is very hard to do.

Tycho Erasmus Brahe
Bio: Upon graduating from New Arcadia’s Old Academy with a Doctorate in Apocalyptics, Tycho Erasmus Brahe founded the Startling Developments Detective Agency. With its charter to “Tread, without fear, in the whispering dark”, he and partner Jonathan Gabriel take on those cases too startling for theri contemporaries. His recent encounter with the God of Silence Yog Sethis has made him anxious. Perhaps we should say more anxious. 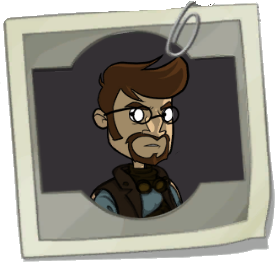 Michael “Stargazer” Wolf
Bio: Before a 30-feet fruitfucker destroyed his house, Michael Wolf was the writer for a hobbyist magazine and an avid gardener with a keen interest in Astronomy. He then joined the Startling Developments Detective Agency in order to find out who was responsible for the destruction of his home. He’s also looking for a place to stay…
And it’s remarkable that a simple Joe Schmo like he was hasn’t been driven totally mad by the events that have transpired while he was trying to find the destroyer of his home.

The city of New Arcadia is a strange and dangerous place, especially when you meddle in the affairs of old and evil gods, especially when they have such a weird and twisted humor like Mike Krahulik and Jerry Holkins!

Note:  This post is my contribution to this month’s blog carnival hosted by “A Butterfly Dreaming“. It also is my answer on Vulcan Stev’s proposed internet meme where all RPG bloggers create superhero version of themselves. And the character above is based on me (although I don’t do any gardening in real life) and he’s a superhero alright. Who else could take on a god and live to tell the tale?
As always I am interested in your comments! Have you played the Penny Arcade adventure RPGs and would you like to play a roleplaying campaign in New Arcadia, too?