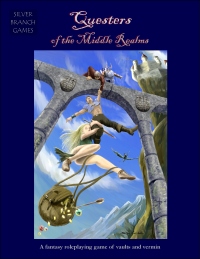 Questers of the Middle Realms is a tongue-in-cheek fantasy roleplaying game by Silver Branch Games. Questers uses the PDQ rules by Chad Underkoffler’s Atomic Sock Monkey and I have to admit that was the selling point for me. I was wondering how this rule system would handle the fantasy genre and I was surprised how good Questers managed to pull this off. Alas the setting, the “Middle Realms” is a very generic and not very interesting setting. But first things first …

QotMRs is available either as PDF or as softcover book. The first is available at RPGNow and costs $8.95, the printed version, that you’ll get at Silver Branch’s Lulu storefront, will set you back $16.50. For your hard-earned money you get a 72-page book with a nice full-color cover. The rest of the book is b/w but features some great artwork and the standard two-column layout. All in all it’s a pretty good looking book considering the low price.

Silver Branch advertises Questers as “The lighter side of traditional fantasy gaming. In less than 80 pages.” And if you expect a rules-light fantasy games you’ll be pretty happy with your purchase. But if you expect it to actually be funny, you’re out of your luck. Don’t get me wrong, Questers is not a bad game, especially when you look for a good example on how you could use the PDQ rules in a fantasy setting. But neither the writing nor setting of Questers is more than mildly funny or even original.

The strong point of the book are definitely its rules. The designers of Questers took the core PDQ rules and added a lot of additional rules to allow an almost D&D-like gaming experience. Each character in Questers can choose between one of the five basic races (Humans, elves, dwarves, orcs and hoblings) and even has a level (something unheard of in core PDQ). Each non-human race gets a Racial Quality that works like a cluster of normal qualities even including weaknesses.
Although the addition of racial qualities makes the rules a bit more crunchy than core PDQ, it’s an interesting concept that works well within the fantasy genre. Halfbreeds like Half-Orcs, Half-Elves, etc. can choose which Strengths and Weaknesses they inherit from their parents. So not every halfbreed character is exactly the same.

Another intersting addition to core PDQ are Questers’ magic rules. Characters can choose Spells from three different camps: miracles, thaumaturgy and mysticism. Each spell is its own arcane quality. Players are basically free to create their own spells but player and GM should make sure that the spells are a) not too broad nor too narrow and b) do have a proper application in the campaign to be played.  At the core of the magic system is the Magic Effects Table which helps the GM to decide which target number is appropriate for any given action.

Another nice touch is the addition of a small bestiary complete with a list of monster qualities. It should be pretty easy to create hundreds of monsters using the examples in the book.

The setting of Questers is the weak part of the book. The world of Median is a generic high-fantasy setting with a standard pantheon of Greater Gods like Elal, god of sky, weather, strength and rulership, and an endless army of Lesser Gods that can be actually created by players on a whim. This is an interesting idea, although I fear that this could actually become problematic for the GM if the players go mad doing this.
The main continent of Median is Ludor, a place that is home for your standard fantasy realms like the north-african-inspired Ar-Karap, the League of Groth, where obviously all the goths of Ludor live and asian-inspired Tek Wei. All in all you get a continent that contains all the usual fantasy tropes. If you want to play a horned-helmeted viking, you probably hail from Valharia, and most elves call Yrsiriel Forest their home.

The book is concluded by some sample characters, the aforementioned bestiary, a short game masters section with some tips on how to run Questers and a sample adventure.

When I have to judge Questers I am a bit torn. I love the idea of a PDQ-based fantasy RPG and I think Questers shines in some areas especially in how the rules have been implemented but it also falls short in a lot of other things. Especially the setting is a bit bland and the tone of the game is not as funny as it could have been. As a tongue-in-cheek fantasy RPG it fails but it’s a great fantasy RPG toolbox and with a very low price to boot!