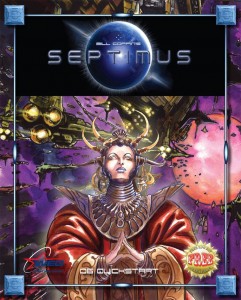 West End Games and Bill Coffin’s Septimus are not dead after all!

Recently Eric Gibson, current owner of West End Games, announced that the secret project, he’s been working on for quite some time now, is in fact Bill Coffin‘s Septimus and that it will be the first WEG product under the OpenD6 banner! Perhaps you remember that the first attempt to release the game as a setting for D6 Space failed last year and WEG had to refund all preorders.

But things are looking good and the Septimus game will finally see the light of day this year at GenCon! According to Eric the only major difference between the original planned release and the new one will be the b/w interiors.

So, what is Septimus about? Until today I didn’t know myself, so I downloaded a copy of the Septimus Quick Start rules (PDF), that are still available at the WEG Fan Forums. SEPTIMUS is a science fiction role-playing game set in the far future and in a distant corner of our galaxy. The focus of the game is SEPTIMUS, a Dyson sphere, that has been found in a fringe region of the galaxy. Within this massive artifact trillions of people have found a new home. SEPTIMUS is both a utopia and your worst nightmare regarding to who you might ask. I think it would be beyond the scope of this mere blog post to describe SEPTIMUS in all detail, so I recommend you have a look at the Quick Start rules to read a primer on the setting. You should also check out ODDS Issue 2 which features an interview with Bill Coffin.

I hope this is only the first of many good news from WEG! It’s good to hear they are back on track!

What about Gygax Magazine? A review… (and a rant for good measure!)