Yesterday we finally started my Ad Astra campaign. In order to make things easier for my players and me, I created a couple of record sheets for characters and space ships. Today I made some minor adjustments to the sheet and decided to share it with my readers. 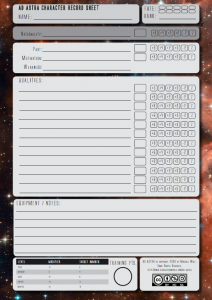 The character sheet was created with the PDQ system in mind, so if you want to play Ad Astra with any other system, you’ll need to create your own sheets. You can download the characters sheet as a PDF document here.