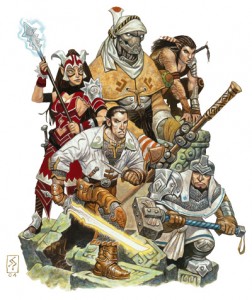 Inspired by Berin Kinsman’s post “Why Savage Worlds is Heir to 3rd Edition” I am thinking about running an Eberron Campaign using Savage World rules. Some of you are probably asking why someone should do this: “If you already own all the Eberron books, why don’t I just use the D&D 3.5 rules the campaign setting was written for?” The 4E advocates will probably recommend getting the updated campaign for Wizard’s latest version of D&D.

Savage Worlds is a rules-light game that is fairly easy to learn and to master and combat is fast, furious and fun (as advertised). One of the reasons why am not entirely happy with D&D 4th Edition is the fact that combat takes ages and that the powers make it necessary that every player has at least a copy of the appropriate PHB or power cards for his class. When playing Savage Worlds it’s enough when the GM has one copy of the rulebook.

Ok, but we still have to convert the whole campaign to Savage Worlds to make this work? Yes and no. Especially the magic system of SW is much different from the one you know from D&D. Converting the Vancian system from D&D 3.5 to SW would be an extremely difficult task and if you ask me, it’s not worth it. Just create characters using normal SW rules and choose Arcane Backrounds accordingly. A wizard or sorcerer for example should use Arcane Background (Magic) while Clerics and Paladins should take Arcane Background (Miracles). In my opinion Artificers could either be handled like mages or you could focus on the item creation aspect by taking the Arcane Background (Mad Science).

SW has a lot of powers that could be easily used to emulate D&D spells and spell-like abilities. Of course you will probably have much less spells than in D&D, but most powers are much more versatile. And if the GM allows it, the players can even break with some classic D&D tropes like allowing arcane spellcasters using healing magic. Your imagination and GM discretion are the only limits here.

Savage Worlds knows no classes, so you don’t have to convert anything there. Just create the character the way you think feels right. The power of SW is that the player is free to create any character he wants without it fitting in the common clichés.

Of course there are some things that should be considered. At first there are the races. You need to come up with appropriate stats and edges for the player races. And although the SW rulebook includes a couple of monsters, the GM will have to create a couple of monsters for his Savage Eberron campaign. But creating monsters and NPCs for Savage Worlds is much, much easier than in D&D 3.5, so that’s only a small hurdle.

One problem may arise, though. One major part of D&D are magic items, something that’s a bit foreign to SW. I may be mistaken, but the SW system was not meant for High Fantasy campaigns. So handing out D&D-like treasure and magic items may become a problem. The good news is that you don’t really need magic items in SW since the game places the focus on the characters and not their equipment.

I believe especially the CSI: Sharn campaign I wrote some time ago would benefit from SW rules. What do you think? Is using SW for D&D campaign a viable alternative?