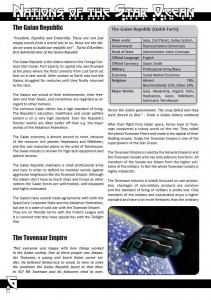 This weekend I finally continued work on my Ad Astra project. Some time ago fellow blogger Greywulf provided me with his awesome SF-themed render artwork and so I decided to give my Ad Astra PDF a complete overhaul. The new version is also much more printer friendly. You can check out a sample page to the right.

If everything turns out as planned, at least the background section should be done in a few days. But then I have to make some important decisions. Should Ad Astra be just background without any rules or shall I make it a complete game?

I’ve looked at several games released under the OGL that could work with the setting. The problem with most OGL systems is, that usually I will either have to include the complete SRD or I will have to comply to one of the Trademark licenses. Since I am no lawyer nor do I want to pay one for a project that will probably never make me any money, I will avoid doing the latter. But without a Trademark license I can’t claim compatibility.

I am currently looking into creating a stripped down variant of one of the OGL systems. Using Microlite20 would be a viable option, although it’s a bit too stripped-down for me. Another possibility would be to create a system from scratch, like I did for Noir. Decision, decisions!

So, what would you do, if you were in my shoes? Adapt one of the OGL systems (like d20 Fantasy/Modern, Action! or perhaps even FATE or FUDGE), create a system from scratch, or release the book without any rules?