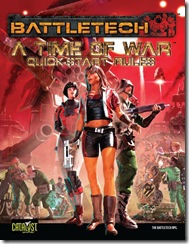 Some time ago, someone mentioned a Battletech RPG on Twitter, I believe it was my fellow RPG Blogger Chgowiz. But after the IMHO horrible Mechwarrior 3rd Edition, I had pretty much lost interest in roleplaying games based on Battletech.

For me, MW 3rd Edition had some serious flaws. The worst thing was the fact that they used d10s for task resolution in the RPG and the tabletop game uses 2d6. In earlier Edition it was much easier to combine the tactical mech combat with the roleplaying game. I also didn’t like the Lifepath system because in a way it forced me to play the game in a certain time period I wasn’t really interested in. Of course, you could try to make some changes to make it fit, but it annoyed me nevertheless.

After GenCon I asked around if anyone has seen the new game there, in hopes they came up with a decent new game after all. And so I was pointed to the Quick Start rules that are already available.

The new Battletech RPG will be called “A Time of War” and it was designed to be easily used with the other books of the core game series which includes Total Warfare, TechManual and a few other.

“A Time of War” uses 2d6 for task resolution and it seems to be much more streamlined than the previous games. I can’t comment on character creation, since it’s missing from the QS rules, but the rules that are available are pretty easy to understand and close enough to Battletech rules to make the integration almost seamless.
And although the game is supposed to be played in an era after the new Star League has fallen again, I hope it will be easy enough to set your campaign into the time shortly before and during the 4th Succession War (my favorite era).

As far as I know the Battletech RPG “A Time of War” will be released this winter.