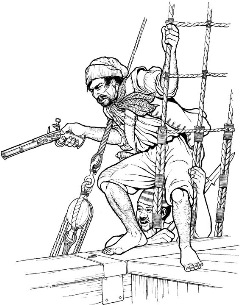 In last October I created some rules for simple firearms for D&D 4th Edition that are still very popular. Some days ago the reader Perfidius posted an interesting comment that I think is worth another look. Most people aren’t probably following the comments in an one-year-old post, so I thought it’s probably the best that it here:

IMO the best take on firearms should be making them Encounters powers, especially if you want to grasp a swashbuckling feel over a realistic one.
In this way, you could make them a bit more powerful, as for instance:

depending on the setting, you could add this encounter power to a character class, give it for free or costing a feat, as prefered.

What do you think ?

I think the idea is compelling, but I have not enough experience with D&D 4th Edition to tell if this could really work. What do you guys think?

This is IMHO how the power could look like in a more refined format: 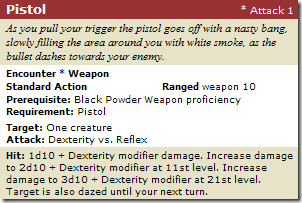 Using firearms like encounter powers would definitely fit the swashbuckling theme. In those days the pistols were usually fired once at the beginning of a fight and then the pistol was discarded in favor of a melee weapon. I like Perfidius’ take on firearms in D&D 4th Edition, but I have no idea if this makes sense in the game. Perhaps some 4E experts can comment on this. Any advice is welcome!