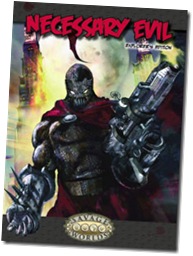 The Savage Worlds game is not only known for its fast, furious and fun game play but also for the unique settings. Some of those settings may look quite ordinary on the first look but most of them have a least a certain twist that makes them different. One of those settings is Necessary Evil.

On the first look, NE looks like any other superhero background. There a super powered humans with flashy costumes, evil alien invaders, an iconic city where most of the action happens and all the other trappings of superhero comics. But on the second look you notice that things are not as you might expect them. The most obvious twist is that almost all superheroes have been killed during an alien invasion and now the super villains have to save the day! The former bane of humanity has formed small cells of resistance fighters that use their superhuman abilities to fight the alien invaders.

The Plot Point Campaign in NE sheds some light on some secrets of the NE universe and contains some more surprises, but I don’t want to spoil anything here. But it’s pretty obvious that the world of Necessary Evil is not your father’s superhero comic world.

Necessary Evil Explorer’s Edition
NE is currently available in the updated Necessary Evil Explorer’s Edition (RPGNow Affiliate Link) which has the size and low prize in common with the current edition of the Savage World core rules. The 192-paged Necessary Evil paperback sets you back $19.99 and you can get it as a PDF document for just $14.99 at RPGNow (RPGNow Affiliate Link). The Savage Worlds Explorer Edition which contains all the rules you need to play in any genre costs just $10, so you get a complete superhero game for about $30. I don’t think there is any commercial superhero game where you get more bang for the buck.

Artwork
The artwork is top notch although some of the interior art has appeared in other Savage World books and the 1st edition of NE before. Alas the maps in the book don’t fit the style of the rest of the artwork. I definitely would have preferred hand-drawn maps over the computer generated ones. Overall art and layout of the book are great and pretty much what you would expect from a Savage Worlds product.

Players Section
The Players Section consist of two chapters: A Necessary Evil, which provides the players with some basic information on Star City and the rest of the world, and Making Villains which contains all the rules for creating villains/heroes for a NE campaign. Aside from humans, players may also choose Atlantean or Hybrid characters. Atlanteans are a race of aquatic humanoids that was almost wiped out in the attack by the alien V’sori and K’tharen. Hybrids are the progeny of a mixed human-atlantean heritage. All Hybrids are telepathic like the Atlanteans. In addition they get either a Free Edge like a human or they share the Aquatic trait with their Atleantean parent.

NE introduces a couple of new edges and hindrances which may have limited use outside of the superhero genre. So if you want to use NE as a resource for other campaigns you may be out of luck here. The most important new edge is the Arcane Background (Super Powers) edge, which has been changed slightly from the one originally presented in the Savage Worlds rules. Every player character in NE starts with this edge for free. Instead of just one power each character can have as many powers he can afford with the 10 Power Points he receives during character creation. New powers are acquired by taking the Power Points edge and saving of power points for later levels is allowed. So characters in NE are much more powerful than their counterparts built using the core rules. In addition to that, each character may take an additional major hindrance to gain 5 extra power points!

The section on gear is quite extensive and contains new armor, new weapons (including alien technology) and some high-tech gadgets like nightvision goggles, rocket packs and stealth suits. The vehicle sections contains stats for all kinds of vehicles from cars to alien space ships.

My favorite section of the book is the Powers list. Instead of just expanding on the powers presented in the core rules, NE comes with a completely new lineup. There are actually over 70 unique powers ranging from Absorption to Whirlwind. Using those powers you could probably recreate any character from your favorite superhero comic with ease. Most powers come with a lot of optional modifiers that allows further customization.

The Player Section is concluded by eight pregenerated characters or archetypes: The Armor-Clad Super, The Blaster, The Brick, The Gadgeteer, The Scrapper, The Speedster, The Stretch, and The Sorceror. Even unimaginative players should be able to create a cool villain using these examples. 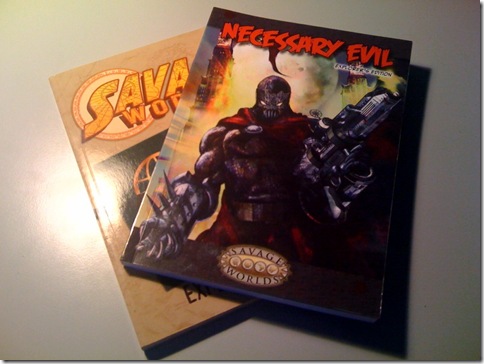 Game Master’s Section
The GM’s Section contains four chapters: A World of Evil, Secrets of Star City, Adventures and The Invaders. The first two chapters are an in-depth description of the world, the recent alien invasion, the V’Sori, the leader of the resistance, the mysterious city of Atlantis and the focus of the campaign itself: Star City. Throughout those two chapters the GM not only gets presented with a lot of background information but also with stats of most major character including but not limited to the V’Sori Warlord Grypon, the infamous Dr. Destruction, and Star City’s mayor and alien collaborator Jerry Perez.

Chapter Five contains the Plot Point Campaign which is divided into 11 episodes. Usually the Plot Point Campaign is started by the first episode. After that the GM has the opportunity to run adventures he has written himself or downloaded from the Pinnacle Entertainment website until he decides his players are ready for the next Plot Point. There’s also a handy Adventure Generator that helps the GM to come up with minor adventures like recovery of an important artifact or a recruitment mission on the spot. I’ve used the Plot Point Campaign in Rippers for example to run a campaign with almost no prep time. That’s what makes Savage Worlds campaigns even more interesting for GMs with not much free time at their hands. The chapter is concluded by over 30 pages containing numerous Savage Tales, short adventures that can be used as the GM sees fit.

Chapter Six is basically a bestiary containing the stats and descriptions of several aliens and generic NPCs. Alas not all NPCs are accompanied by an illustration. Ok, I don’t actually need an illustration to know what a human gang member looks like, but it would have been nice to get some more images depicting the aliens. But that would have probably increased the cost of the book.

The appendix of the book contains a couple of “Villain Hide Out Maps” and the character sheet. And last but not least there’s a handy index.

Conclusion
If you are a fan of Savage Worlds and the superhero genre, you definitely should get the Necessary Evil Explorer’s Edition (RPGNow Affiliate Link). As I wrote in the introduction, you probably won’t get more bang for the buck elsewhere. Even if you don’t like the idea of playing a villain, you may use the book as the basis for a superhero campaign of your own creation. And the Savage Tales in the back of the book can probably be easily adapted to any superhero campaign. I’ve enjoyed reading NE very much and I sincerly hope I can convince my players to start a campaign when we are done with Rippers.