I don’t think there ever was a time during the last 20 years or so, when there wasn’t at least one roleplaying game book lying on my bedside cabinet. I actually believe it has gotten worse over the years, since I am currently reading several books at once, what not only makes my bedside cabinet look like a bookshelf but also keeps me from finishing the Dresden Files novels I’ve started reading some months ago. 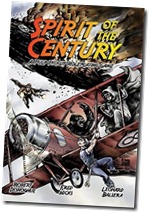 A game that I wasn’t able to acquire for quite some time was Spirit of the Century. It is definitely hard to get your hands on that fine game if you are living in Germany. In the end I decided to order it directly from Evil Hat Productions’ online store.

If I remember correctly I almost paid as much for shipping as for the book itself but the fact that I got the PDF, too, made up for that. The FATE-based SotC is a wonderful pulp game which calls itself a “pickup” game. Alas it contains around 400 pages which take some time to read through. I definitely have a soft spot for the FATE rules, so I hope I can give it a try later this year. 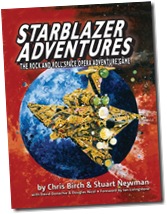 The second book on my reading list is Starblazer Adventures by Cubicle 7. It’s another FATE-based game, but with a SF setting based on comic books from the 80s. I think I mainly got it to compare it to another FATE-based game I enjoyed reading tremendously – Diaspora. While Diaspora is a rather small and thin book, SBA is a tome. It’s a full-sized hardcover book with 600+ pages. I haven’t managed to give it a proper read-through yet, but I at least leafed through it several times. From what I’ve seen SBA allows a slightly wider range of settings (and perhaps even genres) than Diaspora, but the writing in Diaspora is definitely the best I’ve seen in any FATE-based game.

The next three books on my list where all part of the “Gamers Help Haiti” MEGA bundle at RPGNow/DriveThruRPG: “3:16 Carnage Amongst The Stars”, the Serenity RPG by Margaret Wise Productions and the Cortex System RPG by the same company. For some weird reason the latter product has no dedicated page on the official site, actually I didn’t find any mention of it.

3:16 Carnage Amongst The Stars is probably the most “indie” of those three games. Fellow RPG Blogger Greywulf has written a short summary of what the game is about and I hope he don’t mind me quoting it here:

3:16 is a stupidly simple beer-and-pretzels game and a deeply complex moralistic one, all at the same time. The players’ characters are members of the elite 3:16th Expeditionary Force who’s task it is to rid the universe of alien scum to keep the Utopian Earth a safe and wholesome place to be. It’s Starship Troopers, Those Guys from Alien II and every dumb Space Marine movie all rolled into one. Add in rules which perfectly fit the tone and setting, the utterly brilliant Flashbacks concept, the promise of Starkiller missiles and the lightest touch of moral decay and you’ve got a system that everyone should be legally mandated to play at least once in their life.

I have read most of the book already and I think it would be perfectly suited for running a Starship Troopers campaign based on the movies (yeah, there are three of those! And try to avoid watching the second movie, it’s just crap. The third movies is at least funny!). 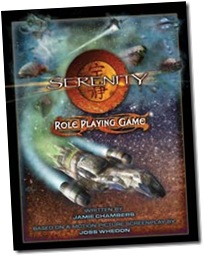 The Serenity RPG is probably the one product from the “Gamers Help Haiti” MEGA bundle that I enjoyed the most so far.

I am a big Firely fan and I have seen the short-lived series several times. The game is based mainly on the movie Serenity but contains most of the material from the series anyway. I am sure this has to do with different companies owning the rights to the TV show and the movie.

The Serenity RPG uses the aforementioned Cortex System RPG which itself reminds me of Savage Worlds a lot. A lot of the concepts are almost identical but Cortex is definitely a system that can stand on its own legs. I definitely plan to write a review of the Cortex RPG and the Serenity game in the near future, so stay tuned! 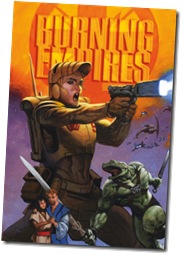 The last game on my reading list is “Burning Empires”. I’ve read much about the game in the last weeks about it from various sources, so I decided to give it a closer look. Burning Empires is a SF RPG based on the Iron Empires comic series by Christopher Moeller using the Burning Wheel rules. Burning Empires is cool but weird on many different levels. When you have seen the book at a local shop you’ll have noticed that although it’s a digest sized hardcover, it’s extremely heavy (4 lbs).  The reason for that are the 656 full color pages on glossy paper. It feels like a brick when you hold it in one hand. The artwork is top notch and the writing is solid but there are as much “WTF!” moments in this book as there are “WOW!” ones. It has a lot of meta game elements and a scene economy and I find it hard to wrap my head around some of the concepts in that game. It’s definitely a game worth having a look at, but I am not sure if I will ever play it. Or perhaps I should play it just to find out how it’s supposed to work.

So, what games are you currently reading? And what are your thoughts on the game I just wrote about? As always any comment is highly appreciated!