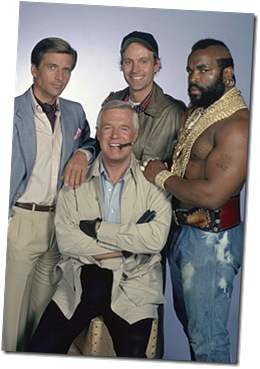 Yesterday while watching  an episode of The A-Team on TV, it struck me. Wouldn’t The A-Team make a perfect model for a RPG campaign?  Let’s look at the basic premise, which is summed up pretty good by the voiceover during the opening credits:

”Ten years ago , a crack commando unit was sent to prison by a military court for a crime they didn’t commit. These men promptly escaped from a maximum security stockade to the Los Angeles underground. Today, still wanted by the government, they survive as soldiers of fortune. If you have a problem, if no one else can help, and if you can find them, maybe you can hire… The A-Team.”

So you have a team of military specialists (the leader, the face, the mechanic and the mad pilot), doing good deeds while hunted by the law. And when I think about it, that does sound like a cool premise for a roleplaying campaign set into almost any genre. I can easily imagine an A-Team in the time after the Thirty Years’ War, in the far future or in most fantasy settings without changing the basic premise too much. Of course you won’t have a pilot in most fantasy settings, but perhaps you can replace that position by a sailor or even a cleric.

The main problem with that kind of campaign is character motivation. What is the reason the A-Team helps people on a regular basis while being hunted by the military police? It’s definitely not the money they’re after, because in most cases they don’t even take the money offered. In my experience players usually need more motivation than just doing “the right thing”, so you probably have to think about what motivates “your” A-Team.

Another recurring element of the series is that the A-Team often creates custom vehicles to overcome their foes in a final fight. Some game systems support doing something like that. When I remember correctly Shadowrun had extensive rules for customizing vehicles for example. This aspect of the series could pose a problem especially when set into the fantasy genre especially when the technology level of the campaign is pretty low.

There’s one fantasy campaign, which suits that campaign model perfectly: Eberron. The basic Eberron campaign is set only a couple of years after the Last War and there’s a reasonably high tech level that allows the construction of weird devices and vehicles. A party could consists of veterans from the Last War, like a human warlord (as leader), an elven bard (as face), a warforged artificer (as mechanic) and perhaps a gnome wizard with some ties to House Lyrandar or Orien (for transportation). They could have been made responsible in parts for what has happened on the Day of Mourning and are now hunted. So they fled to the Sharn underground.

Of course you can’t copy the series completely. Doing basically the same story over and over again may work for a television series, but it will probably get boring for your players pretty fast. But I think the basic premise could help to create an interesting RPG campaign.

The Horror of Leatherbury House