A little over 4 years ago I moved to Juneau Alaska. I was leaving behind Seattle Washington for a better job. I went from living in a city with a population of around 600,000 to a city with a population of around 30,000. Compared to the emerald city, Juneau Alaska is a laid back, slower paced place to live. I have also learned that it rains farm more in Juneau then it ever did in Seattle. (Perhaps I should have checked that out more before I moved.) Nevertheless, I am here and I have enjoyed it very much. It’s a beautiful place to live and you can almost always see snow-capped mountains and the ocean from anywhere Juneau. 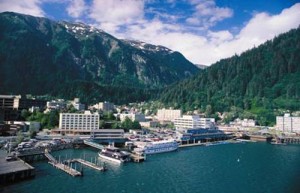 Juneau is defiantly a place for the nature orientated person. Of which, I am not. Hiking, hunting, boating fishing, and skiing are 15 minutes away from each other. For six months out of the year it gets dark with as little as three to four hours of sunlight a day. Having something to do in the dark cold months was definitely a reason that lead me to learn and play Dungeons & Dragons. You can actually read about how I got started playing on my blog.

You really get a sense of how small the capital city in Alaska is when you realize it only has one comic book/gaming store called Collectors Hideaway. Inside you will find the owner Dave Estes, either behind the counter looking up coins for his collectors on his computer, or over seeing games of Magic The Gathering in the front of his store.

Dave’s store has a little bit of everything. Comics, coins, baseball and football cards, Star Wars and D&D miniatures, Magic The Gathering cards, Dungeons & Dragons books and a lot of other stuff. Dave was kind enough to let me interview him for this story, an about gaming in Juneau Alaska.

Youseph: So you’re a gamer. What games do you play and when did you first get started in gaming?

Dave: I play Magic The Gathering. It came out in October of 1993. I started selling in the summer of 1994 and started playing pretty quickly after that.

Youseph: So you didn’t really have a choice then?

Youseph: How did your store, Collectors Hideaway come about? 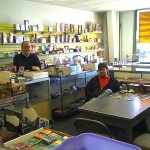 Dave: I wondered into the Alaskan Recruiting Company which was a store in downtown Juneau that sold miscellaneous hobby items. I became friends with the owner who told me that he was having trouble locating items wholesale. So I looked around and started selling to him wholesale. I became his buyer and it left him free to do selling. When he passed on I bought up his stock and opened up a store down town at the emporium mall in 1992. I moved to my current location here about 5 years ago. I have run this store for about 18 years now.

Youseph: Have you ever had any trouble keeping the your store stocked with games or other items?

Dave: No. It’s one of the things I do a lot here. Looking around the internet and trying to find where I can get stuff. I have done that for a while. I have had a least a dozen different wholesalers. Quite a few of those are out of business now.

Youseph: What would you say is the most popular game in Juneau right now?

Dave: Magic The Gathering. By a long shot. At one time I had a mailing list of over 100 people playing in Southeast Alaska. It’s probably half that now. It’s still steady. I play in a gaming group right now with a dozen people. I know there are groups like that all around town.

Youseph: Yeah, I know you have people in your store playing.

Dave: Yeah every Saturday. For a long time we where playing every Friday night. We had tournaments with as many as 30 people. Back in the day Pokémon was large and so was Yugio. I have had quite a few Pokémon and Yugio tournaments in here but that was in the late 1990’s early 2000’s. There would be 16 people in here on Saturdays playing Pokémon. But, Magic the Gathering was the first collectible card game and it’s the best.

Youseph: It still is in your opinion?

Youseph: I touched on Magic The Gathering a little bit in high school and I could not wrap my head around it. I found myself buying the cards thought because I really liked the art and I still have them.

Youseph: Can you play a game Magic The Gathering with 12 people at one table all playing the same game? 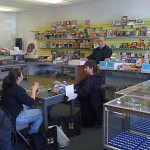 Dave: You can… it’s a bit much. You can play with an infinite number of people. For me multi-player Magic is best with 4 or 5 people. It gives you enought time develop your deck. One on one is such a fast paced game that those games may only last 4 or 5 minutes. 3 person is still just a variation of a 2 person game because everybody is hitting each other pretty quick. Once you get to 4, 5, or 6 people it gets to be a longer turn game. It might last an hour or an hour and a half. People seem to have a lot more fun with 4 or 5 players. It’s a great social game.

Youseph: 1 to 2 hours? wow. I have been playing the same Dungeons & Dragons game for almost a year. It will be a year next month.

Dave: This summer a group of us are thinking about starting a D&D 3.5 game. I have never played before so this will be my first time but what I heard last night is that we might switch to playing online D&D. I don’t know anything about it really.

Youseph: I know there is an online version of Magic The Gathering.

Dave: Yeah. There are several people who play it in town here. It’s pretty good. I have actually played it myself. It’s not social and I play for social not for winning or losing. That’s what I like about magic is that it’s so social. I have seen it in my store where an 8-year-old comes up to a 15-year-old and says “Hey, let’s play”. You don’t see that kind of social stuff in almost any other environment really where an 8-year-old and a 15-year-old are peers. I think that’s really great.

I thanked Dave for his time and picked up a set of Dungeons & Dragons minis from him before going home to start my weekly D&D game.

I did eventually find them. In the one place I should have started looking from the get go. My local book stores.

In the end I  started a Dungeons & Dragons game with my fiancé and some friends from a the local theater. Everyone at the game was new to it and we have all had fun playing and learning the game.

Cthulhu Confidential: From a Player’s Perspective